Honours even as Armagh and Cavan play themselves to a standstill 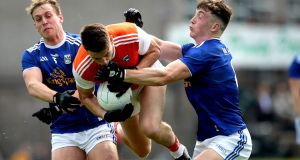 A mid-Ulster volcano erupts. Both of these counties have waited long enough for a place back on Ulster’s big stage so another week is tolerable. But Cavan and Armagh, each seeking to break free from inhibitions and prohibitive recent history, took each other to the brink here.

Not pretty, not exactly flowing either but still: the teams thrilled their supporters with a gripping second half before a gruelling extra-time period when the scoring action ground to a halt and they traded just a point each over 20 long minutes. It was cagey, tactical, hard-hitting: a championship game decorated with cards of every colour and several brilliant scores from distance.

“It is like a morgue in there,” Cavan manager Mickey Graham said of his dressingroom. “Lads just can’t talk because their energy levels are shattered and rightly so. They put their bodies on the line and they gave it everything and any day you go out, that is all you ask from your players. Lads are on their hands and knees and can barely get up to go to the shower. The main thing for next week is that they have the time to freshen up.”

The prize, the prize. That was the abiding factor throughout this fractious Ulster semi-final on a Sunday when a weird June nor’easterly swept through Clones town, or at least the hilly top of it where the famous football field is located.

Both counties will spend the next few days convincing themselves they can return here with optimism for the replay next Sunday. For Armagh, the chief concern lay in a failure to protect and even build on the advantage they secured through the only goal of the match.

For the first 40 minutes of this nerve-wracked encounter, both teams were more pre-occupied by not doing anything to lose this game than they were with chasing the win. But after Jarlath Og Burns stabbed a classy 41st-minute goal to push Armagh into a 1-9 to 0-9 lead, the contest deepened into a powerful blow-for-blow heavyweight contest in keeping with the theme set in Madison Square Garden in the early hours of Sunday morning.

Burns had been the pick of the bunch to that point, setting the tone with a fine early score, powerful in the air and generally accomplished in everything he did. If he faded in the final third of the battle, it was because of two injuries, the second forcing him off in the second minute of extra time.

“He got a very bad bang on the head – a bad cut on his eye,” confirmed Jim McCorry, the Armagh assistant manager. “He was a wee bit fuzzy. So it was precautionary that we left him off in case it was a concussion, so we left him off and I have to say in fairness he probably would have got the man of the match award in a lot of people’s eyes. Today you saw the aerial ability he has, the distribution he has and the scoring power he has.”

Burns’s goal and a red card issued to Cavan’s Ciarán Brady during a very physical second half left Armagh in a strong position: 1-12 to 0-13 up and a one-man advantage seven minutes from the end of normal time.

While Dara McVeety had another scintillating game, only two of Cavan’s starting forwards scored from play. Armagh got a lot right but still couldn’t shake Ulster’s old royalty off. The surge of momentum from the Cavan bench was crucial, with Stephen Murray clipping two points and cutting through Armagh’s defensive cover with three exceptional solo carries.

But it was with the introduction of Cian Mackey that Cavan’s day turned. The veteran delivered three fine points under pressure and kept the ball moving through the tension and confusion of the closing minutes when any mistake seemed fatal. Mackey’s second score gave Cavan a lead in the 69th minute but before their supporters could dream of old glory returned, Jamie Clarke had cancelled the lead, converting a free which he himself had won.

“Look it, I played with Cian Mackey back in 2003 when he was 17 so I know what he is capable of,” said Graham. “He is a great man in that pressure situation and to have someone like him to come in . . . he got on ball and gave us a bit of composure as well as kicking those three great points.”

Mackey also had a half-chance to land a famous winner in the 80th minute but the shot skidded off the outside of his boot and he jumped in frustration as he followed through. It was a chance. By then, the players were spent and the crowd close to exhaustion too.

The nature of the game – frantic, crowded, hard-hitting meant that the many good players cancelled one another out. The efficiency and invention of players like Clarke and Jemar Hall for Armagh and Niall Murray and Conor Moynagh for Cavan stood out through the close covering and defensive orientation of both teams.

It was 0-7 apiece at the break and each score was so hard earned that the daylight Armagh earned in the second half left them in a commanding position. In the end, it took a cool run and fisted point from Stefan Campbell to reply to Mackey’s third sonic boom of a point and close the scoring after 90-plus minutes.

So both these teams are seized with a desperate ambition to push on this summer and what transpired on this cold June day will further convince them both that they have the stuff to succeed. The stakes will be higher when they return here to do it all again.