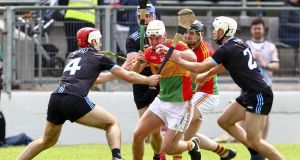 Playing for all the second half with 14 players, Dublin were easy winners over Carlow in the Leinster Senior Hurling Championship third-round game at Netwatch Cullen Park on Sunday.

Coming up to half-time Shane Barrett received his marching orders when his hurl made contact with the helmet of the attacking Jack Kavanagh and referee, John Keenan, had no hesitation in going for the ultimate sanction. It was more a careless moment than anything else, out of context with what went before and what ensued for the remainder of the contest.

At the time of the red card Dublin were well on their way to victory when leading by 2-9 to 0-6.

The sweet striking of Paul Ryan from play and placed balls accounted for five points up to then with the goals coming on 12 and 28 minutes, both from Eamonn Dillon.

The first was simplicity itself when he latched onto a loose ball in front of the scoreboard and his low shot to the bottom left-hand corner found the net. The second was a gem as Conal Keaney and Ryan combined to release Dillon who made no mistake.

By half-time the Metropolitans were 2-10 to 0-8 ahead and it was hard to see Carlow getting this one back even against the reduced numbers. They struggled up front from an attacking point of view, while they were quite unable to stop the Dublin defenders surging forward and providing quick ball to those ahead of them.

The youthful Seán Whelan showed well for the home side while Marty Kavanagh did well too, scoring two points from play and two more from frees.

Carlow needed to start the second half on the front-foot but instead it was the visitors who moved up a gear with points from Ryan, Dillon and Keaney. The latter’s effort was one fit to break any side’s spirits when, in limited space out on the right, he found the posts for a superb score.

Dublin did allow Marty Kavanagh to get at them when the centre forward got down the right but to his disappointment his rocket hit the woodwork and was cleared to safety. The underdogs were doubly punished when Dublin came back and points from play from Ryan, Keaney and a monster from long range from full back Eoghan O’Donnell turned the knife in Carlow’s wounds.

At the end of the third quarter Carlow endeavour was finally rewarded when James Doyle broke clear and his shot found the back of the Dublin net. Chris Nolan then took a pass from Whelan to raise another white flag and the same player ran down the left and planted the ball between the sticks.

Dublin reacted to Carlow’s period in the ascendancy with a number of players putting up claims for starting places the next day. They scored five of the next six points with Fergal Whitely landing two, while Ronan Hayes, Dillon and Ryan (free) were also on the mark.

All in all a job well done by Mattie Kenny’s men who will be glad to get over what many considered to be a potential banana skin against last year’s Joe McDonagh Cup winners.