Galway as underdogs give them edge against Limerick, while Waterford will test Kilkenny 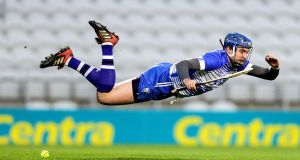 Waterford goalkeeper Stephen O’Keeffe in action during their victory against Clare in the All-Ireland quarter-finals at Pairc Ui Chaoimh. Photograph: Laszlo Geczo/Inpho

An extraordinary weekend for Gaelic games in Tipperary started disappointingly with the loss of the All-Ireland crown on Saturday. It was the best performance of the championship from Liam Sheedy’s team but probably fatally affected by Cathal Barrett’s red card in the final quarter.

The All-Ireland quarter-finals provided two really good games and in the first, Tipp recovered from a poor start, took control and largely kept it until the end. I actually thought they’d hold on even with 14, as they grabbed points to stay one and two points ahead.

You have to give credit to Galway, though. Despite my preview reservations about their goal-scoring capacity, they got three and that was a box they needed to tick.

The vital goal came from an unlikely source because Aidan Harte’s accuracy hadn’t been great for most of the afternoon. Significantly, it showed Galway’s ability to exploit the space created by Barrett’s sending off, which they also used when pucking out: draw the play one way and transfer to the other wing.

As usual there was nothing between the teams – two points this time rather than the usual one – and Galway will be delighted to have survived the challenge. They’ll get back to Croke Park for an All-Ireland semi-final where everyone imagined they’d be at the start of the championship.

Playing Limerick will be a very different challenge, if we draw a form line through Tipperary, who were pasted by Limerick in Páirc Uí Chaoimh. It would be stretching it to say that Tipp were much improved on that display even if they were clearly better.

There’s something about Galway that I don’t fully understand. There’s a Jekyll and Hyde quality about their performances even during the same game. When their game is flowing, it flows but whereas at stages they can look really good and purposeful, they’re then quite capable of lapsing into a series of errors.

Having made a great start on Saturday – Daithí Burke bursting out from the back, Joe Canning orchestrating the attack and Brian Concannon and Conor Whelan buzzing up front – they started to fumble and lose possession and let Tipperary back into the game.

You have to recognise the bottom line for them, though. I said on Saturday that they had convincing to do after the nature of the Kilkenny defeat in the Leinster final. They survived an improved performance by Tipp and saw it out and that deserves recognition but are they in the same bracket as Limerick?

I do believe it’s possible that the Harte goal could prove liberating for them. They’ve started to score goals, which was an issue against Kilkenny and even Wexford. They’ll be underdogs against Limerick and that could suit them as well.

The second quarter-final was another quality match. Clare, in fairness, fought incredibly hard even though their injury jinx struck again with Tony Kelly affected after five minutes. When you think of all the planning that would have gone into coping with him and how everyone would have felt if told beforehand that Kelly wouldn’t be able to play, his team-mates showed great resilience.

Throw in that they were on their third match in successive weeks, which left them looking tired at times, and Brian Lohan can be proud of the team. They never gave up.

I’ve been to every championship match, featuring teams playing for the third weekend and all showed signs of fatigue: Dublin against Cork, Cork-Tipp and on Saturday, Clare-Waterford.

That’s going to be the challenge for Galway and Waterford next weekend but the latter were really impressive against Clare, just six days after losing the Munster final.

Both teams thrived in Páirc Uí Chaoimh on the good surface and the weather helped, which shows that hurling is essentially a summer game because the play and scores were outstanding.

Waterford ultimately reasserted control with their extraordinary work rate, especially in the middle third, as well as the quality of their finishing by the outstanding Dessie Hutchinson. I’ve been expecting him to settle at this level for a while and how he delivered.

His two goals were well taken, beautifully finished and he showed unbelievable vision for the third goal for Jack Fagan and the chance for Neil Montgomery.

Yet one of the highlights for me was how well Clare’s Rory Hayes recovered from his nightmare start. Most corner backs would have gone home after that but he kept at it, which typified the team. They gave everything they had in contributing to a great game.

Most of all, I was hugely impressed by Waterford. They’ve an excellent defence. Tadhg de Búrca wasn’t as prominent this time but did nothing wrong whereas Calum Lyons and Conor Prunty were top class.

Stephen Bennett symbolised the desire for goals up front, taking the game to Clare from the start and at midfield Jamie Barron is back to the form that got him nominated for Hurler of the Year in 2017.

They were so good that you’d have to re-appraise the Munster final. We assumed that Limerick had wobbled a bit because of the struggle to subdue Waterford. Now, it actually reflects well on them.

I’m aware of the third week syndrome but really believe that Kilkenny have a battle on their hands next week.

Finally, I’ve experienced nearly everything in my hurling career but watching the scenes in Cork yesterday was the first time I’ve cried after a match.