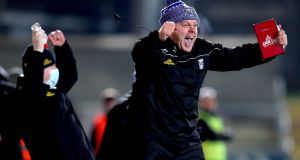 The hardest thing to do is the last thing. Cavan were the better team for so much of this Ulster final that you could only spend the closing stages hoping, for their sakes, that they didn’t find a way not to win it.

There were 67 minutes on the clock when Martin Reilly bore down on goal but his shot was straight at Shaun Patton, and as the rebound skittered clear we shook our heads in the stands and declared that their chance had gone.

But after 23 years of the other kind of day it was time for something different. Thomas Galligan, heroic all championship, took a monumental catch at midfield, was fouled and threw the ball off to Gearoid McKiernan. His free landed in the Donegal square, the sort of let’s-try-something-here ball in you don’t really see any more, certainly not from a team sitting a point up with injury time beckoning.

And maybe it was because Donegal aren’t used to that kind of thing or because Cavan sensed there was a weakness in the air back there, or maybe just because it’s the kind of thing that goes your way when life is smiling at you – whatever the reason the ball squirted loose from Patton’s punch and Conor Madden buried it to the net. Cavan 1-13 Donegal 0-12. Game, set, match.

“I’m waiting on somebody to pinch me and tell me we have an Ulster final to go and play,” said a jubilant Mickey Graham. “Credit to them. Nobody gave them any credit, let’s be honest. Youse included. Everybody wrote them off. Not one sinner gave them one piece of hope.

“But they just went out and ripped up the script there today. I hope people will respect what they’re after doing and see that it’s special.

“It doesn’t annoy me but I knew and we knew as a management team that if we were able to put the second half performance against Down into two halves of football, we wouldn’t be that far away.

“We knew that Donegal were under huge pressure coming in, with all the expectation they were under from their own people. And we wanted to ask them were they in the right mindset, were they concentrated on this game, had they their eyes further down the line. All we could do was go out and ask the questions. I think we saw the answers.”

Ordinarily the manager giving it a bit of Youse Didn’t Believe In Us after a win can come off as a bit peevish. Not here. For a dealer of miracles, Graham is as humble as they come. First Mullinalaghta, now an Ulster championship for his home county for the first time since 1997. And not a hint of a fluke about it.

Donegal came in as 1/14 favourites and for most of the afternoon played like they were already through. Where Cavan were tigerish, they were hesitant. Where Cavan gambled on overlaps and stretching the field, they were cautious and seemed to play by rote. Michael Murphy, Ryan McHugh, Michael Langan – none of their principals stood out at any stage.

Indeed, the most damning statistic from the day is surely the fact that Donegal only managed three of their 12 points when the game was 15-on-15. Cavan had two black cards – the second of them a particularly terrible decision – and Donegal used those two periods to fill their boots. But when it was even numbers they quailed in the face of Cavan’s eyeballs-out display.

The first black card came on 13 minutes when Killian Brady ran across the line of Ryan McHugh as Donegal tried to come out of defence. It was marginal enough–an accidental on purpose kind of thing – but nonetheless it presaged Donegal’s best period. Paddy McBrearty looked sharp, nailing a couple of points cutting in from the right. Niall O’Donnell grabbed one, McHugh, Michael Langan and McGonigle did the same.

It had been a bright Cavan opening but it looked for all the world like Donegal had settled. They outscored Cavan by 0-7 to 0-1 in the 10 minutes Brady was off the pitch, and we presumed they would stretch clear from there. But they only scored three points in the remaining 47 minutes, two of them from frees.

Cavan, by contrast, were like boarding school kids who’d stolen the tuck shop keys. They got in at half time only 0-9 to 0-7 down and then Graham pushed Thomas Galligan into full-forward for the start of the second half. He battled for a point, James Smith flicked one over his shoulder, Madden landed a big one from out on the right.

You could only see one team winning it from there as long as they didn’t go and beat themselves. Ray Galligan wouldn’t allow it though, pulling off three saves to keep them alive. Oisin Kiernan, who was undergoing chemotherapy this time two years ago, put them ahead in the 65th minute with a stunner from out on the left.