Fast-food restaurant chain have put €1.6m into Galway GAA since 2015 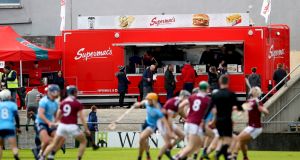 Supermac’s, the sponsors of Galway GAA, have issued a statement seeking clarification from the Galway County Board on where exactly their sponsorship money has been spent and how the players and management and county board has benefited.

They claim it follows questions by the general public and delegates in relation to the Supermac’s sponsorship of Galway GAA.

The fast-food chain also outlined the amount of sponsorship given to Galway GAA over the past five years, with €1.25 million in direct payments plus over €340,000 in ancillary sponsorship.

In a statement, they outlined their concerns:

“Supermac’s would like to seek clarification from the Galway County Board as to how this money was spent. Specifically, have the players and management benefited or has the county board benefited?

“Supermac’s raised financial concerns with the Galway County Board four years ago.

“The vast majority of the Galway GAA public and mentors, who give their time voluntarily for the promotion and administration of our games and the welfare of our players, deserve no less.”

It follows news last week that the Mayo county board were preparing a comprehensive response to the “serious allegations and accusations” made by the Mayo GAA International Supporters Foundation, the county’s unofficial fund-raising body which claims to be withholding €250,000 of funds it had raised in a row over governance.

That potentially damaging impasse began earlier this month and took another turn for the worse ahead of last week’s Mayo county board meeting, after the Mayo GAA International Supporters Foundation circulated a four-page statement to all clubs, outlining their concerns over certain finances and explaining the breakdown in relationships with the county board.

Ahead of the meeting, they requested the statement be read out by Mayo county secretary Dermot Butler: the Foundation claimed it had ceased funding the board “until appropriate governance structures are put in place” and also claimed there was “misinformation in circulation in relation to the breakdown of the relationship between the foundation and the county board”.