Among the highlights are big football finals in Kerry, Mayo and Roscommon plus hurling deciders in Cork, Waterford and Wexford 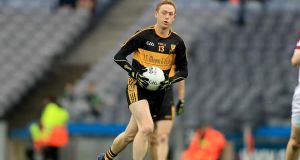 Colm Cooper will be in action for Dr Crokes in the Kerry SFC Final against South Kerry. Photograph: Donall Farmer/Inpho

Carlow SFC final replay
Éire Óg v Rathvilly
(Netwatch Cullen Park, 3.30)
Favourites Éire Óg were lucky to get the draw a fortnight ago after a storming Brendan Murphy-led display got Rathvilly to within touching distance. Forewarned, the town team can take a first title in five years.

Kerry SFC final
Dr Crokes v South Kerry - Deferred coverage on TG4
(Austin Stack Park, 3.0)
The All-Ireland champions are guaranteed progress even if they lose to their divisional opponents but it’s hard to see Crokes being forced to avail of that provision. South Kerry gave a good defensive display against Kerins O’Rahilly’s in the semi-final but struggled with their scoring . The champions’ firepower and their superior bench should see them home.

Limerick SFC final
Adare v Newcastle West
(Gaelic Grounds, 4.0)
Newcastle are seeking to recapture the title they lost last year in this west-county derby against surprise packets Adare, who are still burning the rocket fuel of last year’s intermediate win. If they are vigilant to the goal threat and with Iain Corbett and the Kellys on board, Newcastle can prevail.

Mayo SFC final
Ballintubber v Castlebar Mitchels
(Elverys MacHale Park, 3.30)
The now familiar blitz structure of post-All-Ireland county championships saw Castlebar having to replay their semi-final on Wednesday night and they efficiently saw off Garrymore. There’s a sense though that they haven’t located their A game yet and unless that changes they are vulnerable to Ballintubber who have been showcasing the scoring talents of last year’s county minor Stephen O’Malley.

Roscommon SFC final
Roscommon Gaels v St Brigid’s
(Hyde Park, 4.0)
The former All-Ireland champions are aiming for a seventh county title in eight years. Roscommon Gaels are back in a first final since 2004 after a good semi-final win in which David O’Gara excelled but this is a step up.

Sligo SFC final
Eastern Harps v Tourlestrane
(Markievicz Park, 4.0)
The subplot here is that Tourlestrane have in their last nine county victories failed to retain the championship. Unbeaten in two years, they give it another go here and may well close the deal.

Ulster club SHC final
Ballygalget (Down) v Slaughtneil (Derry)
(Athletic Grounds, 4.0)
The champions are well placed to retain at least one of Slaughtneil’s Ulster titles. The camogie team will attempt to hang on to theirs beforehand, at 2.0, against Antrim’s Ballycastle.

Clare SHC final replay
Clooney-Quin v Sixmilebridge
(Cusack Park, 3.30)
The outsiders pegged back the ‘Bridge last week with Peter Duggan’s late, late deliverance but the suspicion is the favourites for whom Séadna Morey impressed, have a bit more in the tank.

Cork SHC final
Blackrock v Imokilly
(Páirc Uí Chaoimh, 4.0)
Cork have a double bill of county finals for the official opening of Páirc Uí Chaoimh and around 20,000 are expected to attend. Imokilly haven’t been in the final since 2001 but they won a shoot-out with Sarsfields in the semi-final - Séamus Harnedy and Paudie O’Sullivan bagging 2-3 each. Goals may well be in abundance again here but Blackrock, who edged Na Piarsaigh in the semi-final aren’t quite as well stocked off the bench.

Waterford SHC final
Ballygunner v De La Salle - Live on TG4
(Walsh Park, 3.0)
Kevin Moran attempts to bring a memorable year to an upbeat conclusion by thwarting Ballygunner’s four-in-a-row bid. They were nearly beaten to it by Lismore, with the Shanahans rampant, in the semi-finals but the holders rallied well. They have the experience and resources to deny De La Salle, their predecessors in 2012.

Wexford SHC final
Oulart-The Ballagh v St Martin’s
(Innovate Wexford Park, 3.30)
If Oulart win this, it will be a third successive crown and an eighth in nine years. If they are running out of steam, Martin’s are likely prospects to topple them. Oulart aren’t finished yet though and can win here giving Michael Jacob a ninth county medal 20 years after his first.

1 Suarez’ Italian language exam rigged according to prosecutors
2 Awarding of 2023 Rugby World Cup to France part of Laporte investigation
3 What next for green jersey hero Sam Bennett after toughest of Tours?
4 Gerry Thornley: Talk of Anglo-French hegemony is over the top
5 Trump in the rough over playing golf and US Covid-19 fatalities
Real news has value SUBSCRIBE

Trump in the rough over playing golf and US Covid-19 fatalities 18:12
Tottenham’s Carabao Cup tie at Leyton Orient off but no decision on walkover 17:45
Digital passport system could ensure horse movements if Brexit deal agreed 15:45
Awarding of 2023 Rugby World Cup to France part of Laporte investigation 16:12
Suarez’ Italian language exam rigged according to prosecutors 14:24