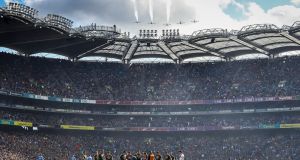 Long road back to Croke Park in September beckons for all counties.

The summer always seems indecently far away at this point in the year but for once, the draw for the GAA championships is uncommonly timely.

It has been the custom in most of the recent Octobers to decry the implausibly early staging of these draws but with the most radical championships in the history of the association looming in 2018, it already feels like a summer that needs a bit of shape put on it. That process starts tonight, live from Studio 5 in RTÉ.

As housekeeping exercises go, there is fair amount to get through. That said, in hurling there actually won’t be a draw at all due to the fact that both the Munster and Leinster championships will be played off in a league format for at least the next three seasons.

The CCCC will meet on Thursday afternoon to organise who plays whom in what order and that schedule will be released during the show. There will be five rounds of fixtures with two games in each round and one team in each province will have a bye each week.

Because the CCCC hasn’t decided yet on how the games will be scheduled, no dates will be released during the show. Everyone is flying blind to a certain extent and no decision has been taken yet on whether to play the games at the same time or to stagger them over Saturdays and Sundays. There will be consultations with TV companies before the dates are decided upon.

On the surface, the football draw will look much the same as it has in recent years, albeit with a few small but significant changes.

In Connacht, the New York fixture has been officially known as the preliminary round for the past two seasons but now it reverts to being one of three quarter-finals. New York v Leitrim will be one, London v Sligo will be another and the third will be an open draw between Galway, Mayo and Roscommon. There will also be an open draw for the semi-finals.

In Munster, this year’s finalists Kerry and Cork go straight into the semi-finals but they can still be drawn together at that stage. They will go into the pot with the two winners of the quarter-finals and any of the four teams can be drawn to face each other. Cork and Kerry last met in a Munster semi-final in 2012.

The Ulster and Leinster championships remain in the same format as before.

For the first time since 2013, the All-Ireland qualifiers will not be split into A and B sides. Initially a measure designed to create more room in the calendar for club matches, it was done away with in among the raft of broader club-friendly changes at the 2017 Congress.

Teams will go into the qualifiers by the same order – teams losing before provincial semi-finals into Round One, etc – but it will be an open draw for each of the four rounds.

For the first time, in the opening three rounds of the qualifiers home advantage will be given to Division Three and Four teams that are drawn against teams from Division One and Two. Otherwise, the games will be hosted by turns in the usual a home and away basis by the various counties.

The qualifiers will feed into the Super Eights – or, as the GAA would prefer them to be called, the quarter-final group stage. The usual annual rotation of which provinces are destined to meet each other in the semi-finals has been kept in place, meaning Group One will be made up of the Munster and Connacht champions, along with the Ulster and Leinster runners-up or the respective teams who beat them in Round Four of the qualifiers.

Group Two, therefore, will be made up of the Ulster and Leinster champions, along with the Connacht and Munster runners-up or the teams who beat them in round four of the qualifiers. There will be two points for a win, one point for a draw. The winners of Group One will play the runners-up from Group Two in the semi-final, and vice-versa.

The abolition of replays will introduce the championship’s most dramatic quirk – the possibility of a free-taking competition to decide matches where the teams can’t be separated, no matter how hard they try (*see panel for details).

This will only happen in the rarest of circumstances, whereby a qualifier game is level after 70 minutes, still level after another two periods of 10 minutes each and then still level after two periods of five minutes each. If anyone has the energy left in their bodies at the point to be still standing, it will come down to a free-taking shoot-out from the 45 in football and the 65 in hurling. We might not get to see it in 2018 but it will be some spectacle when we do.

The draw is live on RTÉ2 from 8.30, presented by Joanne Cantwell, Clare McNamara and Marty Morrissey. A host of players and pundits will be on hand to pore over the outcomes.

*If teams are level after 100 minutes of play, a free-taking competition will be required to separate them. The frees will be taken from the 45-metre line in football and the 65 in hurling.

Each team nominates five players to take them and as long as they have played some part in the game, they don’t have to have been on the pitch at the end. The only exceptions to this are players who have been red-carded or black-carded during the game. They are ruled out of taking part.

Only the five players who are nominated can take the frees. If the teams are level after five frees each, it goes back to the first player on each list and the competition goes into sudden death. This is to avoid the farcical situation that happened in rugby’s Heineken Cup semi-final in 2009 whereby Leicester flanker Martyn Williams ended up having to take a sudden death penalty. And unlike soccer which has experimented in the recent past with the AB-BA format, the GAA will stick to the more recognisable AB-AB format.