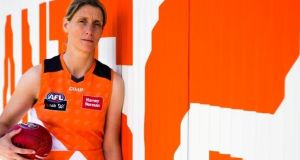 Cora Staunton in the colours of the GWS Giants’ AFLW team.

In all honesty, it started as a joke. Nicholas Walsh was at the Asian Games in Shanghai last November as a guest of the GAA. For the past six years, the ex-Cavan footballer has worked for the AFL’s youngest franchise, the Great Western Sydney Giants. Cora Staunton was there too, as a brand ambassador for the tournament.

Somewhere along the way, they fell into conversation. Walsh had recently started a role with the Giants’ newly-formed women’s team ahead of the inaugural season of the women’s AFL and their first squad had been put together only a fortnight or so earlier. Out of mischief more than anything, he teased her that they could always do with a handy full-forward should her feet ever got itchy. Staunton laughed it off but kept asking questions about the new league all the same.

Spin the tape on nine months and Walsh was in the office of Giants coaching director Alan McConnell. Their first season had been a washout. They lost their first game by 36 points and never moved off the bottom of the eight-team league for the rest of the competition. They scored the fewest points of all the teams and conceded the most. Looking back on the season, a key weakness had been a lack of leadership and experience. Walsh tossed a coin into the fountain to see what sort of splash it would make.

“I said to him, ‘Look, if you need a leadership figure, there’s a girl in Ireland that may be interested in coming over.’ I hadn’t said anything to her at this stage and hadn’t been in touch with her at all. This was just there in August and it had been maybe the previous November since I’d been talking to her.

“But once the idea was out there, we said we’d try it. And everything gathered momentum from there. All it took was a couple of phonecalls. Alan’s son lives in London and he went over and had a kick with Cora in September or so and that was it really.

“It’s a massive punt from our point of view. I know Cora from a Gaelic games point of view and obviously she’s a big star back home. But she’s coming here as an unknown. The average age here is really very young – you’re talking 21, 22. She’s been involved with Mayo since she was 13. She has leadership skills that we think will be a huge addition.”

And so it came to pass that in the early hours of Wednesday morning Irish time, Cora Staunton was picked 45th out of 46 in the 2018 AFLW draft. She will spend the week in Sydney and be back in Ireland over the weekend. Her plans are to play out the remainder of the club season with Carnacon – they have a Connacht final to play on Sunday week against Leitrim champions Kiltubrid – and head back to Sydney when she’s done.

“Hopefully she goes all the way to the All-Ireland final with that,” says Walsh. “We start back at the end of November and depending on how the club stuff goes with Cora, she will probably miss the first one or two weeks with us. That’s the agreement we have in place. You don’t want to take her away from anything either. And for her, it’s a mental break as well. Her brother is here and they’ve just had a new baby. He lives in Randwick, which is just down the road from where Cora will be staying.

“It’s an ideal opportunity for her, she’s coming towards the latter part of her career and it’s a four-month contract. It’s not like she’s doing a Pearse Hanley and leaving the country for six or seven years. She doesn’t really miss any football at home and that was a big thing for her. She doesn’t want to miss anything for the club of for Mayo. She’ll play her last game at the end of March. She’ll be here for four months, December to March. It’ll be a great experience, she’ll earn a bit of money and that will be that.”

‘A bit of money’ is about the height of it. A small group of top earners in the AFLW are on contracts worth $27,000 – around €18,000. Staunton won’t be on anything like that. Contracts are tiered, from €6,000 in tier three to €12,000 in tier one. Having kicked a sherrin for the first time in her 34 years only on Tuesday, Staunton will have to start at the lower end of the market.

Learning the game will be her first job. Kicking, obviously. But getting used to the right sort of movement is all new and getting rid of the ball in the tackle will take a while to work out as well. The work starts now.

“We spoke about it at length yesterday,” says Walsh. “We took her for a bit of a runaround on the oval. I think anything from 30 metres out, Cora will be fine with. I would imagine we’ll play her mostly close to goal and she’ll be well fit for that. Where she will have to gain the most ground over the coming months is what to do when she drifts out to around the centre-half forward or midfield area and she has to execute a kick-pass. That’s where the difficulty might come in. But Cora being Cora, you wouldn’t rule anything out.

“I could even see her yesterday, we had to pull her back in terms of what she wanted to do. She got off a flight here at seven o’clock in the morning and she was on the field in the heat of the sun at midday looking to kick the ball around. It was 34 degrees and we had to go to her and say, ‘Cora, let’s relax here a little bit.’

“We want her to drive training standards. From a skill point of view, she won’t be the best yet. But from a leadership point of view, driving standards and communication, she has a career behind here whereas most of the other players are still in their early 20s and need to be guided on it. She has a presence, she carries herself really well and that’s what we’re bringing over.”

With Staunton going and Mayo teammate Sarah Rowe openly considering following her over, the prospect of more women’s football players making the jump over the coming years is suddenly on LGFA’s radar. Walsh insists, however, that this is a one-off as far as he is concerned. A confluence of events as much as anything.

“If anyone is going, ‘Oh, this is going to be rampant, the AFL are going to come and take all our players...’ I don’t think that’s going to be the case. I can’t see it, to be honest. This is a unique situation, really. It all came together very randomly.

“It came about because of where the Giants are right now in terms of a lack of experienced players and the fact that I’m working here and a joke I made in Shanghai last year. That’s how it happened. There’s no big recruitment drive or anything. It’s not a case of going to Ireland and hand-picking the best talent or anything like that. This happened with two phonecalls.”

She won’t be the first Irish player in the AFLW – Cavan woman Laura Corrigan-Duryea played for Melbourne last season and will go again in 2018. But she’s been living in Australia for a decade, a back-packer who never came home. Staunton is the first to move specifically to be a player.

Still pushing boundaries, even as the last sands of her career drop through the glass.

1 Jack Nicklaus’ Trump endorsement leads to avalanche of dismay
2 World Handicap System: What is it? How does it work? Will my handicap change?
3 Six Nations - France v Ireland: Kick-off time, TV details, permutations, team news and more
4 Here is your handy guide to sport on television this week
5 Return of Conor Murray’s box kicking could exploit French vulnerability
Real news has value SUBSCRIBE