‘The thing for Dublin is to try and become a top-four team consistently,’ says new boss 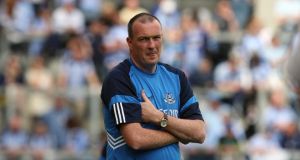 It seems Pat Gilroy asked himself several questions before agreeing to take over as Dublin hurling manager, and accidentally hints at one of them.

“I think if Dublin were getting the best out of themselves, in the last performance of the year, then we’d be in semi-finals and finals more regularly than we have been,” he says. “1938 is a long time ago.”

That, lest anyone forget, being the year Dublin last won an All-Ireland senior hurling title.

Gilroy doesn’t openly declare that his outright ambition. But after being ratified last week to take charge of the Dublin hurlers for the next three years, he’s clearly intent on bringing the same enthusiasm and commitment which in 2011 saw him guide Dublin to their first All-Ireland football title in 16 years – having been a substitute himself on that preceding 1995 team.

Gilroy has no inhibition about accepting the role despite his limited hurling experience.

“A lot of people would argue that I didn’t play football at a top level either,” he quips with perfect self-deprecation.

That breakthrough win for the Dublin footballers in 2011 has frequently been attributed to the new culture which Gilroy cultivated in the team – yet he insists the players created it themselves – and that there’s no reason the hurlers can’t do the same.

“There was a dynamic that was created by individuals coming into that squad, maybe because of certain attitudes we were looking for.

There were other questions Gilroy asked himself: would he have the time to commit? What exactly did he have to offer?

“It’s always a great honour to be asked to do anything, either in your own club or your own county. I’ve got so much from both, that giving back, it’s very hard to say no to things when you’re asked.

“Family was the biggest consideration. Obviously, you have to be sure in your own mind that you’re going to add something to do. Otherwise you shouldn’t be doing it.

“The thing for Dublin is to try and become a top four team consistently. We’ve been in and out of that the last 10 years. There is so much hurling happening in the city that we really should be pushing to be up there on a more consistent basis.

“There are 50 hurlers in Dublin when you’re watching the club championship who are technically very competent. It’s about bringing that on to a different level for sure. But a lot of it is their mindset, their physical conditioning, their diets – all the package.”

Gilroy is “very close” to confirming his backroom team, which he’ll bring before the Dublin County Board before the end of the week, although it’s still unclear if that will include former Galway manager Anthony as team coach.

Speaking at the launch of the AIG Fenway Hurling Classic and Irish Festival, to be played in Boston on November 19th, Gilroy also says the dual situation in Dublin shouldn’t be an issue; names like Diarmuid Connolly, Con O’Callaghan, Cormac Costello and Ciarán Kilkenny have been floating around, all players known for their hurling skills.

“Well, they were,” says Gilroy, putting a gentle accent on the ‘were’. I mean if you watch the club championship, and you see guys like that playing, they’re struggling playing hurling. Like, they don’t stand out necessarily.

“There might be guys at the end of his panel that he [Jim] is looking to move on and they might be interested in wanting to play hurling. But I only want guys who really, really want to play for Dublin hurling, and they can come from anywhere as far as I’m concerned.”

Gilroy added that he has no intention to tread on Jim Gavin’s preserve by enticing in some dual players.

As regards former Dublin hurling players who have left the panel in recent times, however, the door is open.

“For me, it’s very simple, if a guy is playing for his club and he’s playing well, it’s a blank sheet of paper for me. I don’t know the history.”

And Gilroy is not surprised at Dublin football’s success under his successor.