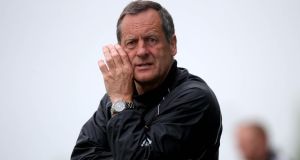 John Meyler has been confirmed as the new Cork senior hurling manager, succeeding Kieran Kingston on an initial two-year term and bringing some considerable experience to the role.

Meyler - father of Irish football international David Meyler - has previously managed Wexford, Kerry and Carlow, and this season served as a senior selector alongside Kingston, while also managing the Cork under-21 hurling team.

The St Finbarr’s club man has also previously served as a selector with Cork in the early 2000s, and more recently guided the Kerry senior hurling team to the Christy Ring Cup in 2011. He also has extensive experience at club level, leading a number of teams to success in both Cork and Kerry.

“Our senior hurlers had a very successful season in 2017, and maintaining continuity and building on that good work is vital,” said Cork chairman Gerard Lane.

“John Meyler brings a wealth of experience to the role, has extensive knowledge of all the young players coming through, and has been part of the outgoing management team. John will now work on appointing his backroom team.We wish him every success in the role.”

A successful dual player at club level, winning an All-Ireland club football medal with St Finbarr’s along with a number of county titles in both codes, Meyler also played minor hurling with Wexford, and was later part of the Cork senior hurling panel that won the All-Ireland in 1986.

Denis Ring of Fermoy has also been appointed under-21 coach for a two-year term, following on from his success this year in guiding the Cork minor hurlers to a first Munster title since, 2008 and also reaching the All-Ireland final, where they lost to Galway.

All-Ireland Under-17 winning coach John Considine of the Sarsfields club will take on the role of minor coach for the next two years. Backroom teams will be announced when finalised.

“The appointments of John Meyler, Denis Ring and John Considine, should ensure that Cork hurling continues to build on the success of 2017 in a consistent and coherent fashion, and I have no doubt that further honours will be achieved in the very near future,” added Lane.