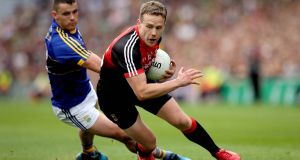 Mayo’s Andy Moran was named as the 2017 Footballer of the Year. Photograph: Ryan Byrne/Inpho

It wouldn’t be the All Stars without a bit of a snub hubbub. Stephen Cluxton’s omission from the football selection seemed to be the main talking point at Friday night’s ceremony at the Convention Centre in Dublin, the three-in-a-row winning captain of the Dublin team missing out in favour of Mayo’s David Clarke for the second year running.

Also for the second year in a row, the Footballer of the Year award went outside the All-Ireland champions, with Mayo’s Andy Moran following his teammate Lee Keegan on the roll of honour.

On the whole, the selection is most notable for the fact that it contains 13 players from the two All-Ireland finalists, the most of any All Stars team since the scheme began in 1971. While it’s certainly not unprecedented for the All Stars to narrow their focus down to as few as four counties – it happened as recently as 2014 – never before has there been such a concentration of selections from the two September survivors.

Dublin lead the way with seven gongs, with Mayo appropriately close on their tails on six. Colm Cavanagh of Tyrone and Kerry’s Paul Geaney round out the team, leaving everyone else staring at their shoes. For the second year in a row, the Connacht champions leave All Star night empty-handed, Roscommon following Galway in 2016 as provincial winners who didn’t last long enough to sufficiently impress the selectors.

But for those sniffing out the red meat of controversy, the choice of Clarke ahead of Cluxton will be the first port of call. On the face of it, it is a curio that Cluxton, the man roundly hailed as having had the greatest effect of any one player on the sport over the past decade, has now gone four years without an All Star nod.

Especially when Dublin have put together three All-Irelands in a row in that period. For historical context, the only other times three-in-a-rows were done in the life of the All Stars – 1978-81 and 1984-86 – then Kerry goalkeeper Charlie Nelligan took home an award somewhere along the way on both occasions.

Though it isn’t the sort of thing that Cluxton will get too perturbed about, there are likely to be plenty of voices raised on his behalf. He conceded just two goals all summer, one of them an injury-time consolation against Kildare. The flip-side of that coin is that Dublin’s general dominance meant he only faced six shots at his goal in the whole championship.

As Edwin McGreal of the Mayo News pointed out during the week, Clarke was by far the busier goalkeeper, facing 18 shots over the course of Mayo’s nine-game marathon and saving 10 of them. And perhaps surprisingly – without wishing to completely steal the fine work of said publication – Clarke and Cluxton’s kick-out numbers are more or less identical, both across the season and in the final. Cluxton’s omission will be a debating point, for sure. But it’s possibly stretching matters to gin it up into an outrage.

In the traditional net-casting to find other names who can count themselves unfortunate to miss out, All-Ireland foes Lee Keegan and Ciarán Kilkenny are probably highest up the list. There’s a small irony to be found in the fact that Kilkenny was surely bang in the running until Keegan erased him from that pulsating final in September. Con O’Callaghan’s brilliant early goal and Dean Rock’s four points from play probably did for their Dublin team-mate. O’Callaghan was the straightforward choice for Young Footballer of the Year.

As for Keegan, his outstanding All-Ireland final display obviously came too late. His thunderous quarter-final against Roscommon apart, the 2016 Footballer of the Year had too many so-so games to squeeze into the selection. That said, he must have run Cian O’Sullivan reasonably close in the final reckoning.

In any other year, Tom Parsons would have been a strong choice for one of the two midfield spots but once Cavanagh was nominated in that category, he and James McCarthy were never going to be shifted.

Keith Higgins and Colm Boyle pick up their fourth award apiece, drawing level with Keegan at the top of the all-time list of Mayo players with the most All Stars. Cavanagh and Chris Barrett both pick up their first award despite having crossed the Rubicon into their 30s.