Cathal Cregg and Daly brothers back in Roscommon reckoning 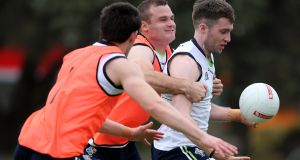 Cathal Cregg during training with the Ireland International rules squad in Melbourne in 2014. Photograph: Inpho

A number of high-profile Roscommon footballers who missed out on this year’s Connacht-winning campaign have been invited back for pre-season preparations.

Among them are Cathal Cregg, and the Daly brothers – Niall, Conor and Ronan. They are expected to form part of a training panel who will compete for a spot in a reduced league squad in the new year.

“It is true that we’ve contacted lads and some other new lads, and we’ve got a very positive reaction from them,” Roscommon manager Kevin McStay told The Irish Times. “They are looking forward to it and there’s a really good shot of making the league panel.

“We’ve to be very clear about it , what’s happening is everybody is going to be doing their own training. And then when they come in we’ll have something between the high 30s and low 40s until the middle of January when we’ll be in a position to name a league panel.

“So that’s really the plan, that everyone can get a good run at it. Certainly from the management’s point of view we want these lads to come back in and thrive. Obviously they are good players, and for one reason or another they weren’t around last year, and certainly we could do with having the best versions of each of them back in the squad.”

Former All Star nominee Donal Shine is not among the players returning to the camp, while the door has been left open to Neil Collins should he return from the US. The full back departed for New York earlier this year where he has pursued a career in the fashion industry.

“Everyone is on trial, and I think that’s the fairest way to go about it,” explained McStay, whose team bounced back from league relegation to win the Connacht championship in style and draw their All-Ireland quarter-final with Mayo, before losing the replay by 22 points. “We can certainly improve on the panel, in terms of size, in terms of power, and yeah we’ll be trying to do that. The panel will be very fluid until the middle of January.

“There is a paradigm shift next year in terms of the calendar. This is almost like the premiership now. You have a pre-season, and you either have a good pre-season or you don’t, and once the ball is thrown in for the FBD [League], it’s not too far from week on week. We’ve December and we’ve January, after the individual work we’ve to do in September, October and November. And that’s never been as critical. It’s a new thing for all of us.”

Like Shine, Cregg was an All Star nominee after Roscommon won the Connacht championship in 2010. The 30-year-old Western Gaels attacker is also a former International Rules panellist and double Sigerson Cup winner with DCU.

“I think it’s a mix of everything but they are footballers and they miss playing football,” McStay said when asked about the players’ reasons for returning.

“They are Roscommon footballers and they miss playing for Roscommon. The bigger thing was that I looked for a bit of stability with the board in terms of tenure, thankfully I got it.

“So we’ve all had to make our minds up on this. The management are going to be there until 2020 so it’s important that we all shake hands and tidy this up. Because these are young players, and if everyone dug in on this – and I include ourselves on that too – then after three or four years for some of them their careers could be finished. Or for others they’d be missing their best years, or some of their best years.

“The draw, I think was also very encouraging for people. There’s no point in saying that we haven’t – all things being equal – as with last year we’ve a great chance of getting to a Connacht final. Of course Leitrim will think the same thing. That will be the biggest game of the season. So that would be a big thing for lads thinking ‘will I or won’t I?’”

Last month AIB released a behind the scenes documentary of Roscommon’s season and McStay explained the rationale behind the decision.

“It was what it was. There were other counties approached who didn’t fancy it. I suppose at the time, we were at a very low place. And I wanted to do something that showed the people of Roscommon that their players really cared, they were getting a very hard time. There was that aspect to it, there was also a financial aspect to it.

“But it was a big chance, these things can go two ways but we had nothing to lose at that point, I think. Young people are a lot more comfortable with someone with a small handheld six-inch camera walking around in the background. And say after two nights the rules of engagement were made and the lads from AIB were superb.

“There were a few bits and pieces that couldn’t be handed over for tactical reasons for oppositions next year, but I think we gave as much as we could have. Whatever the lads do in their lives they’ll always have that of the day they won the Connacht final.”