Shane Carthy: ‘I was two years wearing that mask, but internally I was crumbling’

Dublin footballer on the challenges of tackling his mental health issues 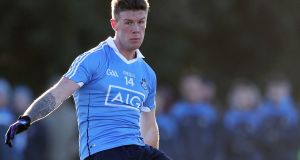 Shane Carty in actin during last year’s O’Byrne Cup. “I’m absolutely touched by all the messages and well wishes, and more importantly to hear of someone who has gone out and sought help now.” Photograph: Bryan Keane/Inpho

The last thing Shane Carthy wants or expects right now is to walk back on to the Dublin panel.

Not with his utterly changed perspective on life and football and everything else in between. Or indeed his heightened sense of what exactly constitutes success.

What he does want, and expects of himself, is to give it his best shot, and whether that’s good enough time will tell.

In the meantime the telling of his story, his crippling and at times terrifying experience with depression in the aftermath of Dublin’s All-Ireland winning success of 2013, to breaking point a year later, aged only 19 and the rising star of the county under-21 team, has been proving both therapeutic and rewarding.

It has been the latter in helping him realise how fortunate he’s been to come through it all, including the good and bad days with Dublin football.

Six days before Christmas, in a lengthy online blog, Carthy wrote frankly and eloquently about his journey over the last four and a half years.

It detailed, without overdramatising, the downward spiral which, days after producing a man-of-the-match display in Dublin’s 2014 Leinster under-21 final win over Meath, saw him wake up in St Patrick’s Mental Hospital.

Only then did he begin to face up to “the inner demons I had kept away from for many years”.

Under the very deliberate headline ‘I’m No Longer Surviving, I’m Living!’, Carthy also explains what ultimately brought him back to where he is now, just turned 24 and more determined to ever to revive his football career with Dublin.

“The first intention with the blog was to busy myself, to give something back to myself, positively, and maybe further afield in the sporting community,” says Carthy, who in November completed a Sports Science degree in DCU, and is currently on a year out.

“I’d already done some talks on mental health and depression in schools and clubs, but they’re limited to those present, whereas with the blog people could read and maybe relate to it at any time.

“It completely surpassed that, in terms of what I expected, the scale of the response and reaction I really can’t believe. And in such a good way.

“I’m absolutely touched by all the messages and well wishes, and more importantly to hear of someone who has gone out and sought help now, on the back of it, or just something that might have resonated from the blog. I also wanted people to know there’s lot of people out there that depression touches.”

Carthy will, along with distance runner Kevin Dooney and ironman triathlete Gerard Prendergast, also be part of a three-person panel discussion this Saturday as part of the First Fortnight festival, the charity organisation aimed at challenging mental health prejudice through the creative arts and spoken word.

Carthy will further outline some of the mental health issues specific to sport, especially for any athlete or player seemingly at the top of the game, which for the male in particular can sometimes be more difficult to face up to.

Playing with Naomh Mearnóg club, in north Dublin, already an All-Ireland minor winner with Dublin, in 2012, he was called into Jim Gavin’s senior panel in 2013 and that year playing scintillating football for the Dublin’s U-21s at centre forward.

The team that featured Jack McCaffrey, Brian Fenton, Paul Mannion, John Small, Cormac Costello, amongst others, went on to win that 2014 All-Ireland U-21 title in his absence.

“I was two years wearing that mask, but internally I was crumbling,” he says. “Football was the only thing covering it up, as long as I was training, playing.

“And it relates to where I’m at right now, because for the last few years, I’ve been in and out of Dublin championship panels, and that in itself can be a huge low.

But because I’m educated now in how my minds works, and the emotions naturally attached to this, I’m able to control it, whereas before, I didn’t know how to handle those emotions, couldn’t handle them.

“It became an ever worsening situation, whereas now I know how to put a positive spin on it, something I can deal with. It was hard to accept that at the time, when the lows were very low, but I’ve come out the other side now, better and stronger for it. From sporting, academic, and personal points of view.”

He no longer fears the highs or the lows, as long as he feels he can control them. Carthy was invited back onto the Dublin panel in early 2018, featuring in four league games, only be to be dropped again for summer. Instead of letting that get him down, he spent what he felt was an overdue summer in America, playing football for a club in San Francisco, and that gave his fresh perspective again.

“I was involved again for the 2018 league, and again let go, and these are difficult moments for everyone. Football has given me so much, and I’m thankful for that, and playing football in the US last summer was a great experience. That negative turned positive straightaway.

And football definitely is still a big motivation for me, I always strive to be the best I can be, whether I get back there or not, I’ll never stop. This year it may have to be at club level, but I want Jim Gavin to know that if or when that call might come, I’ll be ready, and I’m staying ready.

“I enjoy the training, and that motivation to get back involved is a part of it as well, to be a part of the huge success the lads have had over the last number of years. But that’s not the sole focus of why I do it. It’s the feeling as well of accomplishing something at training. Everyone can relate to that.

“From a physical standpoint, I’m absolutely on top of that, and for this time of year, January, I’m training as hard as I can, I’ve a huge goal to make it back into Jim’s plans. I’m doing everything I can, but outside of football as well, just going to the Phoenix Park for a run or a cycle, because exercise in general has been huge in my recovery, and still is.”

And after surviving, he says, the critical part now is to focus on the living again. “And I was just surviving, by the skin of my teeth actually, and wasn’t living. Only now after I’ve got the help I needed do I feel like I’m living again, and that’s why I feel I’m in a good position to impact people.

“There is also that sense ‘if I knew then what I know now’. And I’m still seeing a psychologist, spaced out now to about once a month, and that’s the path we’re taking, to be the more independent, make it my own recovery. I’m not putting any pressure on myself either.

“It could take six months, or six years, but eventually I will get that independence back, to go on, and there will be things in the way, because that’s life. But I want to strive for excellence in mental health as well. It may not be 100 per cent every day, but I won’t stop striving for it.”