Westmeath take advantage of Kildare sending off to make semi-final

Jack Cooney’s side will face neighbours Longford in last four 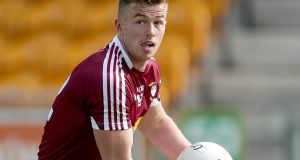 A fine second-half performance against a Kildare side reduced to 14 players was the key to Westmeath’s surprise victory in an entertaining O’Byrne Cup game at The Downs.

Fionn Dowling edged Kildare ahead after just 11 seconds but the sides were tied at 0-3 after 16th minutes when Westmeath wing back David Lynch blasted the ball over the bar when a goal looked certain.

Kildare made the most of this let-off three minutes later when David Slattery applied a clinical finish from close range after goalkeeper Kevin Fagan had only partially cleared a probing delivery from Pádraig Fogarty.

Cian O’Neill’s troops suffered a major blow on the half-hour mark when Paschal Connell was dismissed after picking up his second yellow card but they still led by 1-5 to 0-7 at the break.

The home team got off to the best possible start on the change of ends, corner forward Joe Halligan bundling the ball to the net after 20 seconds despite the best efforts of Mark Dempsey to prevent the ball crossing the line.

Westmeath had the better of the exchanges for most of the second half with Sam Duncan working hard in and around midfield, and Ger Egan and Ronan O’Toole always prominent in attack.

Neil Flynn was untypically wide from a couple of scoreable free for the visitors before experienced home defender James Dolan came to his team’s rescue with a goal-line clearance from Kildare sub Paddy Brophy in the 64th minute.

Westmeath wrapped up a fully deserved win with late points from Duncan and O’Toole, whose free with the last kick of the contest followed a ‘mark’ – the fourth such score of the match.

The experimental rules had no major bearing on the game but both sides were penalised at various stages for the use of a fourth consecutive handpass. Jack Cooney’s men now face neighbours Longford in one semi-final next weekend, while Dublin and Meath will contest the other.