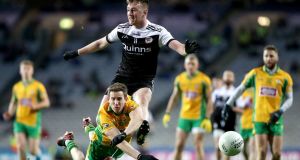 It was hard-earned too, Ulster champions Kilcoo forcing them to extra-time in Croke Park back on January 19th, before Corofin emerged as champions. Crossmaglen (twice), St Finbarr’s and UCD had previously won back-to-back football titles too, but Corofin are the first to pull off a treble.

With a presence on every line of the field, the Galway and Connacht champions have now won 20 of these awards since they were first presented three years ago, with defender Liam Silke and forward Martin Farragher have been honoured in each of the three years.

It is that sort of consistency which enabled Corofin to see off Kilcoo in an extra-time. As a result, they dominate a selection that draws on players from five clubs from across the provinces after the recent campaign.

There are awards for Robbie McDaid and Colm Basquel on the back of their work with Leinster champions Ballyboden St Enda’s, while there is also a an award for Nemo Rangers defender Kevin O’Donovan, along with Seán Gannon who starred for Éire Óg in their run to the Leinster final.

The awards will be presented at a special banquet at Croke Park this Friday night. In addition to the football and hurling teams being honoured, there will also be awards announced live on the night for the overall AIB GAA Club Footballer and Hurler of the Year.

(The AIB GAA Club Players’ Awards are selected by a panel of GAA media from across print, radio, TV and digital, and is chaired by GAA president John Horan). The hurling team will be announced on Wednesday).