Tracksuits for Down, Mark Bradley defying the numbers, Brian Cody’s shoutout in Vegas 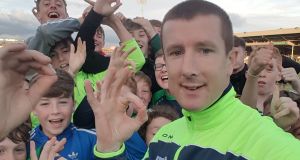 Hurling fan Buff Egan in all his glory.

When it comes to hurling, particularly in Munster, nobody owns the ‘digital space’ quite like it like Buff Egan owns it. A hurling fanatic who attends everything that moves, Buff posts updates to his tens of thousands of social media followers and is mobbed for selfies.

His catchphrases, most accompanied by the ‘okay’ hand signal, include “drink it in, maaaan!”, “Hail! Hail!”, “Capiche”, “Deleeeeted”, “Lash it off the belly!” and “tantalising”. Oh, and “Shucky ducky quack quack” is another, usually with a rubber duck emoji . . .

Egan has become an underground phenomenon. A 12-feet wide placard appeared on the terrace during the Munster SHC final proclaiming “Buff 3:7” and this week, former Tipp hurler Shane McGrath and his namesake, Waterford legend Ken, tweeted their regards to Egan from New York.

And in answer to a question as to what he would buy if he won the Lotto in a factfile in the programme for Wednesday’s Munster Under-21 semi-final, Déise star Shane Ryan was in no doubt.

“A season ticket for Buff Egan,” he said. Now there’s a title for a documentary!

Tracksuits an easier fit for Down

GAA anoraks know that the great Down side of the 1960s were the first GAA team to wear tracksuits – and, after an excellent interview with legendary official Maurice O’Hare (90) in the Belfast Telegraph, we now know why.

“At that time, the subs tended to tog out and then put their trousers on again and sit on the sideline,” he recalled.

– A banner spotted at the US Darts Masters in Las Vegas during the match between Raymond van Barneveld and David Cameron (no, the other one).

Speaking of Down, the story of the mullet-sporting madman who scaled the roof of the Nally Stand, looking vaguely like a Cherokee brave, during the 1991 All-Ireland final got another spin this week.

The climber was Liam Harrison, whose son, Connaire, was full-forward for the Mourne men yesterday.

“There was barb wire, there was spikes but I got up through it anyway – the best seat in the house. It was great. “I stayed the whole time, the whole time till the whistle went and down I come, down on to the field with the rest of them,” he told the BBC a few years ago, adding “and we partied for months after it.”

While the Dublin juggernaut shows no signs of slowing down, with routine minor and senior titles secured yesterday, there was still one, admittedly small, sliver of hope for the chasing pack.

The 1-17 Kildare racked up yesterday was the highest total Dublin have ever conceded in a Leinster SFC final (the previous record was 1-16 by Offaly in 1982). The 1-13 scored by Meath in the 2012 final was the highest previous tally by the beaten finalists’ in Dublin’s current run. Oh, and while we’re talking about numbers and Leinster’s big beasts, the official attendance yesterday clocked in at a chilling 66,666!