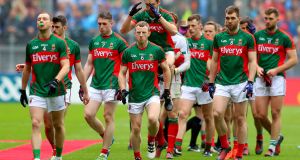 The curse on Mayo football, allegedly laid on the 1950s team, has found plenty of corroboration in the past 30 years. Since last winning the Sam Maguire in 1951, Mayo have contested 11 different finals, including two replays, and not won any of them.

Yet, arguably the greatest deprivation the county suffered pre-dated the 1950s and even the county’s first All-Ireland win in 1936.

It goes back to 1925 and although many are aware that there was something odd about that year’s football championship, a brief account of what happened shows how unfortunate Mayo were not to have become Connacht’s first winners of the Sam Maguire.

To rub salt into their wounds, the honour went to Galway, who defeated them in a belated Connacht final that October and were later deemed All-Ireland champions on the basis of a presidential ruling handed down by Wexford’s Patrick Breen at the end of a Central Council meeting by which stage both media and a number of Connacht delegates had left.

To this day, one well-known Galway GAA voice, journalist and broadcaster Jim Carney is in no doubt that there is only one course of action for his county.

“I’ve long felt, after spending many hours digging deep into this now 95-year-old controversy,” he told The Irish Times, “that Galway GAA board should revisit it and clear the way for the All-Ireland SFC roll of honour to be amended.

“Indeed, for the past 10 years I often wrote that Galway’s record was ‘eight titles plus one awarded’ and I now think it should be confined to eight titles, with the 1925 All-Ireland senior football championship officially changed to ‘null and void’.”

There is a preliminary context from 1925. That year’s congress allowed players in Dublin to declare for their own county rather than as previously their place of residence. This benefited counties outside the capital and had probably been inspired by Dublin’s three-in-a-row in the early 1920s.

It had the unintended consequence of creating a confusion over where players were entitled to play their football and in that spacious grey area, rules-based challenges to eligibility flourished.

The 1925 Connacht championship appeared to go on forever. Sligo and Roscommon met six times between draws and objections. It was ultimately decided by Connacht Council to send the previous year’s champions Mayo to the All-Ireland semi-finals in August.

There they upset the odds in beating Wexford. The real drama started in the other semi-final, played in Tralee between Kerry and Cavan. Kerry, who the previous March had won the delayed 1924 All-Ireland, won narrowly but an objection was lodged by Cavan on the grounds that opposing captain Phil O’Sullivan had played for two clubs in Dublin, contrary to rule.

This was upheld and Kerry expelled from the championship, but they then challenged Cavan’s JP Murphy for doing the same thing. That too was upheld, leaving Mayo as the last team standing, even though Wexford had also tried their hand at an objection, which failed.

It was claimed that Mayo had been then declared All-Ireland champions by Central Council but no minute of this was produced. Nonetheless, the logic of the situation suggested in the absence of any other valid claim, that was the reality of the situation.

Connacht, meanwhile, arranged the delayed provincial final for October 18th. Galway won with a late goal. The late Jack Mahon in his ‘History of Gaelic Football (2000), acknowledged ‘that even Connacht Council officials of the time felt that only the Connacht title was at stake’.

This is partly corroborated by Mayo agreeing to play in Tuam and under the control of Galway referee Stephen Jordan from Athenry, whose performance was described by the Western People as being “to the best of his ability and, being a Galway man, it was a great responsibility.”

At the end of the month, October 31st, Galway’s Connacht Tribune dropped a bombshell.

“It is stated semi-officially that the Galway senior football team have been declared All-Ireland champions for 1925 as a result of their defeat of Mayo last Sunday week.”

The story emerged that at the end of that month’s Central Council meeting, Breen had made the declaration, as reported in the Irish Independent on November 7th.

“That decision was made at a very late hour of the meeting, the agenda for which did not contain anything in reference to the championship. Some of the Connacht delegates and the press representative had left the meeting before the ruling was made.”

The mystery deepened when the same paper reported on Monday, November 9th: “Inquiries regarding the report that the Central Council had declared Galway All-Ireland champions have failed to elicit either confirmation or denial. Mr. O’Toole, sec. GAA, when asked for an official statement last evening, said ‘the GAA were issuing no statement at present’.”

Breen and Central Council, however, stuck to their guns despite protests from Mayo, the Connacht Council and Kerry delegate, the legendary Dick Fitzgerald.

As a postscript, the GAA organised a further tournament between the four provincial champions. Kerry refused to take part and Galway beat Cavan in the final.

Any suggestion that this could be the basis of Galway’s claim to be 1925 champions is, however, contradicted by Jack Mahon’s recollection that visiting the Donnellan family in Dunmore – home to three generations of All-Ireland winners – he was shown medals for both the All-Ireland and the subsequent competition.

Jim Carney feels that Galway should at this stage permit the record to be amended.

“It would be the honourable course of action for Galway to take, for we now know enough about everything that happened at the Central Council’s mystery midnight meeting to be sure that, morally, it came – at best – into the category of an Irish solution to an Irish problem.”