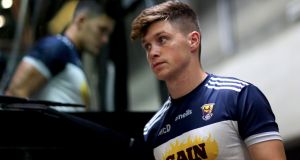 It’s three weeks ago since Conor McDonald had to flip the Closed sign on 14Fitness, his personal training and keep-fit business in Gorey. The Wexford full-forward had been running classes in the Naomh Éanna clubhouse for the past two years, starting at six o’clock every morning, himself and another fitness instructor Amy Cody. Like everyone else, he has no idea when he can start up again or what will be left of the business when he does.

All in all, he is taking it pretty well. It’s a heinous blow, obviously, but it also can’t be helped. McDonald is more interested in addressing the things that can be changed than in aching for the things that can’t. He is taking the crisis as an opportunity to set about other aspects of his business that he’d left gathering dust on the shelf.

“It’s not an ideal situation now but the way I’m looking at it is that it probably gives me a chance to look at things that I have neglected. I really haven’t done much since the start of the business to develop any kind of online stuff and that’s something that a lot of people would like. A lot of people do the bulk of their stuff online and through social media but between training and work, it’s really probably not something I have got into that much.”

The way he looks at, he has been fortunate enough, all told. The club have been good to him so it isn’t like there’s a ruthless landlord banging on his door. And while he has taken a serious financial hit, the government’s Covid-19 scheme will mean some sort of income through the crisis. The sun will rise in time, 14Fitness will hopefully rise with it.

Until then, he’s been pushing little bits here and there out into the online sphere and watching it go. For something so vast, the internet can be a crowded place in times like this, with every second video telling you what you should do/be/achieve now that you have all this spare time on your hands. He feels a bit leery about a lot of it, truth be told. Healthy aspiration is one thing. Shaming people into doing more than they need to, that’s something else entirely.

“I think a lot of people are going to be affected mentally by this. The uncertainty it will bring - jobs, home life, everything. It’s very important that people in the fitness industry and people who are putting stuff up online are very careful with their choice of words and the pressure they’re putting people under to do home workouts and stuff like that.

“The approach should be to be there as an option, then leave stuff up there for people to choose to do when it suits them and not to bombard people with exercises. If people see me putting up exercises twice a day every single day, if I keep pushing it and coercing people into it, that’s not fair on them. They’ll start thinking, ‘Does this guy have nothing else to worry about?’ Or, ‘I haven’t even had time to look at the last workout and he already has another one up.’

“A lot of people are going to be under pressure, they’re going to be feeling down. This whole thing is going to cause stress and anxiety. Doing a home workout should not be another bit of pressure you find yourself having to deal with. It shouldn’t cause stress or anxiety. So I think for people in my position, choice of words and choice of content is very important through this time. Doing a home workout is a choice for people and that’s all it should be. Not a chore, not a pressure, not something that has to be done every day twice a day or that kind of thing.”

He has kept his own routine going and jokes that if he isn’t in the best shape of his life when hurling starts up again, he’ll have questions to answer to himself. But at the same time, athletes need targets and in the current vacuum, nobody can guess at what they are. All the gym work in all the world is fine and well and there are any amount of walls around the place that he can go and bang a ball off. But none of it is hurling. He misses even the bits of it he never imagined himself pining for.

“Like, even some of Davy’s training, sure everyone knows how mad it can be. And no matter how much you might dread them in November and December, the tackling drills and everything else, right now you’re just craving for someone to hit you.

“You’re playing a game of Fifa and all you want to do is just burst a fella. It has given me an insight into what life will be like when I’m not playing hurling or when I retire. It’s not good! I hope it’s a long, long way off if this is anything to go by.”