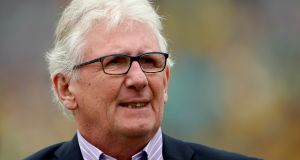 The death has taken place of Newry Shamrocks’ John Murphy, one of the most influential figures in Down football. An All-Ireland medallist in 1968, he was manager Peter McGrath’s right-hand man when the county recaptured the Sam Maguire twice in the 1990s.

Part of the rising generation when Down’s pioneering generation were winning the county’s first All-Irelands in 1960 and ’61, John Murphy won a MacRory Cup medal with Newry’s Abbey CBS in 1964 and went on to feature in an All-Ireland minor final two years later.

Although Down lost to Mayo, he had a memorable afternoon, lining out at centrefield and when switched to centre forward, helping to drive a comeback that nearly rescued the day which he ended with three points from play.

Several of that team were introduced to the senior line-up in 1968 and he was a major contributor to a terrific year for the county, winning the league and championship double, beating first, Kildare and then in September, Kerry in the All-Ireland final.

Talking to the Irish News on the 50th anniversary of the All-Ireland, John Murphy took issue with the view that it was in ways an opportunist victory.

“I’ve heard it said a number of times in the past that the ’68 team came in under the radar to win the Championship, but we didn’t really. We’d made our presence felt earlier on in the year by going unbeaten in the League, so everybody was well aware what our make-up was.”

In the All-Ireland final when Down maintained their still intact championship record against Kerry – five wins out of five – beating them for the third time that decade, en route to the title. He would be a selector in 1991 when the feat was repeated in that year’s semi-final.

In 1968, however, John Murphy played a key role in Down’s accumulation of a big early lead, which ultimately saw them home.

In the eighth minute just after Seán O’Neill, one of four survivors from the earlier winning teams, had scored a goal, the young wing forward was keenly alert to a frantic clearance from the Kerry defence and rifled a left-foot shot past Johnny Culloty for a 2-3 to 0-1 lead.

“We in Down GAA have been privileged that John Murphy was part of our story,” was the official reaction on the county website. “He was a man of integrity and a man of honour; someone who lived the dream of playing for his county, winning an All-Ireland, scoring that famous goal and then of helping to shape two Down teams to win All Irelands.

“He enjoyed the reunions with playing colleagues from those great days and of growing older with the boys of 91 and 94, He had his favourite seat in the stand at Páirc Esler and watched the next generations give of their best for both Down and Newry Shamrocks.

“Men like John Murphy helped to make Down the proud GAA county that it is today, he was a great ambassador for Down, he was man who loved his football, he loved his County, his Club and most of all he loved his family.

“On behalf of the Gaels of Down we say thank you for the wonderful days that you gave us. To his wife Veronica, to his children Niamh, Fiona, Gavin and Karl, to John’s grandchildren, his daughters in law, his brothers and sisters we once again offer our deepest and heartfelt sympathy on the loss of a husband, a father, a grandfather and a brother.