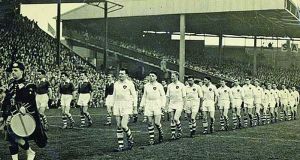 All three All-Ireland finals in 1956 were delayed due to a polio outbreak in Cork.

This month 70 years ago, the world of Gaelic games was shocked to learn that PJ Duke had died at the age of 25. An established member of the Cavan football team, he had won two All-Ireland medals, including in the famous Polo Grounds final of 1947 in New York.

One of the celebrated halfback line with John Joe O’Reilly – who led his teammate’s cortege through crowded streets in Dublin but who would be dead himself little more than two years later – and Simon Deignan, he was a dentistry student and Sigerson Cup star at UCD when on May 1st, he was claimed by tuberculosis.

TB stalked the Ireland of those decades like a spectre. It could strike anyone and in the case of PJ Duke, it struck so fast that he had been named to play a league semi-final against Kerry the day before he died in St Vincent’s Hospital.

In fact his absence from the match is casually recorded in The Irish Times before the terrible news emerged.

Despite such a high-profile casualty, the world of the GAA by and large wasn’t especially disrupted by the disease and learned to live with it until the impact of Dr Noel Browne’s campaign in the late 1940s and the development of antibiotics and a vaccine all but eradicated the public health threat.

However, it had been a constant menace in Ireland, according to Carlow College’s Dr Ida Milne, an expert on the history of medicine and disease and author of Stacking the Coffins: Influenza, War and Revolution, 1918-1919 – the definitive history of the Spanish flu pandemic which killed over 20,000 in Ireland a century ago and which has taken on a sharp relevance as the country battles coronavirus.

“TB goes on. We call it the long epidemic,” she says, “but flu was a pandemic, which affected the young and was a disease that thrived on the poverty of the time as well as the susceptibility to many different diseases, including respiratory,” which she believes may have muffled the impact of the pandemic.

“When you look at the 1910s, there are over 70,000 deaths per year on the island, which is double what we have now. An awful lot are from infectious disease and children under five are particularly vulnerable. People accept that there are going to be deaths in the family from disease, which may be one of the reasons why the flu doesn’t appear to attract as much notice. It’s only with a hindsight gaze that we separate it out.

“At that time, 500 or 600 a year dying from scarlet fever, the same from measles, 800 or 900 from whooping cough, 200 or 300 from diphtheria, which doesn’t spread that quickly. But you see thousands dying from bronchitis, pneumonia and TB – at all ages.”

She can name impacts on the GAA and its players. At a lecture in the GAA Museum’s summer school of two years ago on the centenary of the flu outbreak, she mentioned that perhaps the only thing that could prevent Dublin equalling her own county Wexford’s pioneering feat of four-in-a-row was a pandemic.

In 1918 there were consequences. The anticipated challenge to Wexford that year was from Kildare – who would go on to win the 1919 All-Ireland – but leading footballer Larry Stanley was out of action with the flu and his team lost to Louth, who were in turn beaten by the champions.

It wasn’t the last instance of the pandemic appearing to help Wexford. Their narrowest win in the four successive finals was the last, a one-point win over Tipperary.

“The All-Irelands that year weren’t finished until January and February 1919 because of the pandemic,” says Dr Milne. “When the football final eventually happened, Tipperary’s top scorer Davy Tobin couldn’t play against Wexford because of the flu.”

Another aspect of the pandemic was that of Gaelic Sunday, the mass protest against the British government’s attempts to control the games which saw fixtures played all over the country in defiance of authority. The demonstration was a total success with no attempt made to disrupt it.

Unlike the respiratory diseases, breeding in poverty and cramped conditions, polio was a particular threat to the middle classes and the young

It couldn’t have happened in August 1918 had the flu not been in abeyance between its first and second waves.

The other great 20th century scourge was poliomyelitis or polio. It differed from TB in that it maintained a low-level presence but created particular difficulties when there was an outbreak because it was infectious and children were particularly vulnerable.

“You’d always find a number of cases every year,” says Dr Milne, “but it also came in outbreaks. We remember Cork in 1956 because it was the last big epidemic but poliomyelitis was found in other parts of the country as well.”

As reported at the time, it was a product of rising living standards, which reduced both exposure and immunity. Unlike the respiratory diseases, breeding in poverty and cramped conditions, polio was a particular threat to the middle classes and the young, also being known as infantile paralysis.

The first major outbreak came between 1942 and ‘43 – even though the disease only became notifiable in 1941 – and carried a massive mortality rate with nearly 487 cases and over 133 deaths. It doesn’t feature as a disruption for GAA activity, possibly because war-time restrictions reduced the impact. Ironically, Cork escaped the epidemic but would be at the centre of it in 1956.

The GAA remembers the Cork polio outbreak because as fate would have it, all three of the county’s senior teams, football, hurling and camogie, reached that year’s All-Ireland finals. All three were lost but it goes down in the history books the last time until this year that finals had to be postponed.

The first case came in June of that year and the spread was steady throughout the summer. The strain of polio was “of a mild nature”, according to the minister for health Tom O’Higgins but there were still hundreds of cases and a small number of deaths.

As the cases grew, panic set in and Cork assumed pariah status. It was known that Offaly refused to play a challenge against the county’s footballers. Before the All-Ireland semi-final against Kildare, Cork supporters were asked not to bring any children younger than 14.

Anecdotally, according to Dr Milne, there were major apprehensions.

“There was the story about a cobbler in Gorey, who did the boots for the Cork team in the ‘50s, and his children caught it. My cousin told me that although I didn’t look into it in any detail!

“But he also said that he remembers his father, who had young children at the time and was a dairy farmer. People would come to the yard to buy milk but he set up a table at the end of the lane and left the churns there and wouldn’t let people into the yard in case the children got it.”

On 11th August, the hurling final between Cork and Wexford was postponed by Central Council. The Wexford delegate was Nicky Rackard, the county’s legendary full-forward, whose 1-5 would go a long way to winning the title. He declared that they would “co-operate to the fullest extent”.

Even then, there were misgivings and in a letter to The Irish Times the week of the match, a Dublin correspondent styling themselves ‘Paterfamilias’ called on the Government to “cancel the final” unless assurances could be given by the Cork Medical Officers that “the disease has been conquered”.

By then the outbreak was under control and the All-Ireland went ahead and would become famous for Wexford’s win and as Christy Ring’s last All-Ireland. In the weeks that followed, so did the camogie and football finals with Antrim and Galway completing a year to forget for Cork.