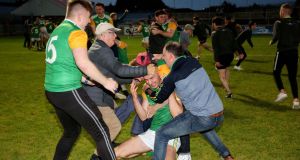 Dungannon captain Pádraig McNulty celebrates with fans after the shoot-out win over Trillick in the Tyrone SFC final at Healy Park in Omagh. Photograph: Lorcan Doherty/Inpho

It was one of the anti-apartheid movement’s most resonant slogans: no normal sport in an abnormal society. How could it proceed when all of the community interaction and social norms that an ordinary society takes for granted were so grotesquely undermined by actual government policy?

It was the rock on which the bleating about not mixing sport and politics perished.

Covid-19 has demonstrated a peculiar genius for attacking worthwhile things and finding the faultlines in society.

When it comes to what are referred to as ‘culture wars’ the GAA has walked a careful line for the simple reason that as a broad church it accommodates people of different views and does its best to stay away from overtly political issues.

Then again, what’s a political issue?

There was a brief controversy during the marriage equality referendum in 2015 in which intercounty referee David Gough wasn’t allowed to wear a rainbow wristband in demonstration of his support for a ‘yes’ vote when taking charge of a league match.

In justification of the stance Croke Park pointed out that the association had also stayed out of the 2012 Children’s Referendum even though it was seen at the time as unexceptional – until more than 40 per cent of the electorate did take exception.

It’s hard to categorise public rows about anti-Covid-19 measures as ‘culture wars’ simply because – outside of the US with its cheerleader head of state – the assembly of loons and crackpots who protest at these measures don’t really have critical mass in terms of a public debate.

The GAA will accordingly be uneasy at the rumpus in Northern Ireland over the aftermath of the Tyrone football final. The scenes of jubilation at Dungannon Clarkes’ first title in 64 years were intensified by the nature of it after a penalty shoot-out.

Twitter went into its default setting on such occasions – that of ‘meltdown’ – and predictably more heat than light was generated.

Ulster Council was unhappy, noting that “we are living in a pandemic and the post-match scenes did not portray the association in a positive light”.

It was too good an opportunity for First Minister Arlene Foster to miss or at least pause to consider and her condemnatory Tweet raised the temperature. Was it really necessary on a day when further civic restrictions were about to be announced anyway to be in a rush to express an opinion?

Needless to say it had the effect of consolidating the battle lines.

Obviously if Ulster GAA can criticise the behaviour of its own crowds and threaten to shut down fixtures, there can be no doubt about the merits of the matter but this was never going to be simply a health issue.

Responses came in kind. Sinn Féin MLA Sinéad Ennis ignored the substantive matter and Tweeted: “Our clubs and County Boards were the vanguard of the community response to Covid19. We will not allow our games to be demonised and scapegoated by anyone.”

There are two primary points to be made here.

Firstly this was behaviour in conflict with public health directives. There should have been no need even to discuss that so it was an intensely dismal experience to scroll through the online debate to see virtually no one offering a view that wasn’t entirely in keeping with the sectarian divide.

Maybe it was too cursory a survey but apart from the provincial council itself, there appeared few within the GAA community willing to say that this shouldn’t have happened.

In order to make the point more effectively rather than just pandering to the partisan base, could the First Minister not have attempted to draft a joint statement with Deputy First Minister Michelle O’Neill for release on Monday evening, drawing attention to the need for better behaviour at sports events.

Other examples of such outbreaks of exuberance were cited online, principally the aftermath of Glentoran’s IFA Cup success this summer and questions raised as to why these hadn’t attracted similar opprobrium.

Of course the toxicity levels had already been heightened on Monday by the Dungannon team singing what was apparently – the sound quality was poor – an IRA song after their triumph. This was, inevitably, stuck up on social media.

Of course this was a group of young men celebrating but it was again depressing that even though most of them were presumably hardly born by Good Friday 1998, this should still be the repertoire of choice in a still divided society.

Official reaction was not public but one assessment of how it would impact on the Ulster Council’s outreach work was a terse, “it won’t help”.

Secondly, this isn’t just a problem for Tyrone. What happened in Omagh was amplified by the social media pile-on but after an encouragingly efficient club season, the GAA has entered the period of county finals, where temperatures will run higher than in previous rounds.

Celebrations mightn’t be conducted with exactly the same abandon of Dungannon players and supporters but a brief glimpse of any venue where a championship is being won is unlikely to reveal strict adherence to social distancing and mask wearing.

Some finals below senior grade are played in grounds with no stand and maintaining the two metres on a terrace is near to impossible. Even behind closed doors, replacements sit in clumps and roar their heads off.

This is sport and the celebration of success. For NPHET and the Government the question is how highly sport is to be valued for the excitement and relief and distraction it provides in the face of strict regulation.

Does the outdoor environment buy sport any more indulgence if directives are being ignored? In these unhappy times is normal sport any more possible in an abnormal society?