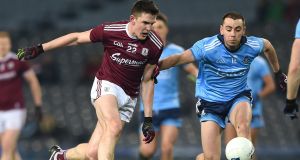 Cormac Costello in action against Galway’s Cein D’Arcy. The Dublin forward took the opportunity to showcase his undoubted talent during the league clash at Croke Park. Photograph: Tommy Grealy/Inpho

After a football pre-season dominated by the experimental rules or more specifically the hand-pass restrictions intended to unshackle the game from the ills of massed defence, the start of the football league has been more pleasantly oriented towards actual attacking play.

With the hand-pass idea banished one quarter of the way through its trial phase, the most prominent of the surviving experiments has been the advanced mark, which has become a talking point over the first two weekends.

Dublin manager Jim Gavin has been dismissive towards the idea, insisting that his team hasn’t been practising it and effectively arguing that the ability to hit a forward with a long pass is just part of the game and that a player will know what to do when that happens.

It was used twice by his team in Saturday’s defeat of Galway but they were on the receiving end the previous week up in Monaghan. That wasn’t a huge surprise, at least not the involvement of Conor McManus, who as Ireland’s best International Rules footballer of recent years has proved himself extremely adept at using the mark.

Then, at the weekend there was a trio of attacking performances sufficiently eye-catching to be potentially significant.

On Sunday afternoon in Cavan, there was further evidence of the scale of the talent possessed by Seán O’Shea. Kerry took their time overhauling the home side but their centre forward’s ability as a dead-ball kicker was showcased yet again. On a gusting afternoon, his unerring frees into the wind kept the team ticking over for most of the first half.

His movement and sharpness also yielded a couple of quality points from play. Under-age pedigree makes all of this if not predictable then at least unsurprising.

Nonetheless it occurred probably to anyone thinking about it that O’Shea has been granted a bit of shade from the glare of publicity by the prodigious 2018 put down by his fellow rookie and Young Footballer of the Year, David Clifford. As this season unfolds, he’s going to be in plain sight and no signs so far that that will faze him.

From under-age he has been a player earmarked for senior success but things haven’t progressed smoothly in the way they have with other rising prodigies. Now in his mid-20s, he is equipped to play more than a supporting role.

Physically he is now capable of staking the territory in which he operates – at one stage nearly breaking through a clutch of defenders before being fouled – and the accuracy of his finishing has always been a signature asset, most prominently in the 2016 All-Ireland final replay when he scored a vital 0-3 in the win over Mayo.

Despite that, injury and loss of form have so thwarted his career that he has started just two championship matches, his debut in the ill-fated All-Ireland semi-final against Donegal and then last summer in the dead rubber against Roscommon – to go with appearances off the bench that have climbed into double digits.

Injury has reared up at inopportune times – the season after his All-Ireland exploits, a chronic hamstring problem kept him off the pitch just when he might have capitalised on the achievement and instead of kicking on, he ended up with getting back just two championship outings, both as replacement in the All-Ireland semi-final and final.

Last year though was encouraging in that he played in all six All-Ireland fixtures, getting decent game time in all matches.

Galway wouldn’t have posed the stiffest test on Saturday but his ability in the role of a roaming centre forward to make space for himself and willingness to shoot on sight – there were also three wides, two a bit wild and one after being informed on by Hawk-Eye – was clearly evident.

His work-rate is also excellent. In the opening minutes he was on hand to secure the ball after a Johnny Cooper block in front of the Dublin goal.

Caution is obviously advisable when assessing the prospects of anyone breaking into the Dublin starting attack – even before factoring in any notional comeback by Diarmuid Connolly – but if Costello gets a run of matches in which his scoring returns remain high, it becomes a dilemma for Jim Gavin.

With a certain amount of fluidity in the team, principally Brian Howard’s likely long-term future farther back, the Dublin manager is unlikely to burn too much midnight oil wondering whether he can find a place for arguably the most gifted finisher at his disposal.

It’s probably a bit unfair on Fionn McDonagh to lump him into this company but Mayo have been crying out for new forwards – it seems like since 1951. Last year, before the championship Andy Moran voiced a view that to beat Dublin a team needed to be able to score 0-20 and whereas Mayo were inching towards that, they hadn’t got there yet.

McDonagh’s 1-3 from play against Tyrone included two positives: his pace and strength from wing forward and the calculated determination to pass on a handy point and go instead for goal – more importantly, score it.

He was a significant contributor to his club Westport’s intermediate All-Ireland two years ago – the county’s first – and was brought into former Mayo manager Stephen Rochford’s development panel.

James Horan worked with McDonagh when at Westport prior to re-taking the Mayo job and would have been aware of his strengths as an athlete and competitor as well as what’s said to be an exemplary attitude.

It’s too early to cast him in one of the final roles necessary to Mayo conquering the ultimate stage and his Sigerson performances with UL have been uneven but McDonagh represents exactly the type of new blood the county needs to revive their challenge.

A fortnight in and we’re already thinking big.