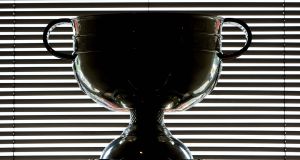 The All-Ireland football quarter-finals may follow a round-robin format if a proposal is passed. Photograph: Inpho

The prospects of the All-Ireland football championship adopting a round-robin system in the last eight, has moved a step closer. The publication of the motions list for this month’s GAA annual congress in Croke Park reveals that the proposal to re-organise the quarter-finals into two groups of four will be put as an experimental provision for the years 2018, ‘19 and ‘20.

This effectively places a double lock on the format being permanently accepted. Motion one proposing the change, will need a two-thirds majority to be accepted and in three years, it will require a similar vote if the proposal is to take effect permanently.

That may be affected by another couple of motions on the clár, which propose that the weighted majority by reduced from two thirds to 60 per cent or in another proposal, 50 per cent. It is expected that the former motion will have the best chances of success.

Carlow county board propose motion number 25, which seeks to reschedule the dates of the football championship rather than re-format the structure. The county received a good hearing for its own motion on reform at last year’s congress when they sought to re-organise the format on the basis of a seeding system. Eventually the vote went against them 40-60 and the motion wasn’t re-submitted for this year.