Derry and Fermanagh both consigned to Division Three 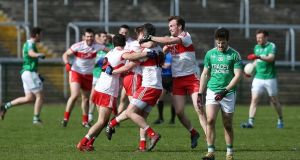 Derry celebrate their last-gasp win over Fermanagh but victory wasn’t enough to keep them in Division Two. Photograph: John McVitty/Inpho

A 75th minute long-range point from Carlus McWilliams sent Fermanagh tumbling to Division Three in a thriller in Brewster Park on Sunday.

But it still was not enough to keep Derry up as Down’s draw with Cork keeps them in Division Two for another year.

But the home side had only themselves to blame after dominating most of the second half, and they were leading by three points with five minutes of normal time left.

But Derry responded in devastating fashion as midfielder Conor McAtamney got on the end of a brilliant Derry move to blast the ball to the Fermanagh net in the 67th minute.

Enda Lynn put them in front for the first time since the 10th minute of the first half and Quigley levelled matters to set up a frenetic finish.

McAtamney provided a lightning early tonic when Derry won the throw in and Niall Loughlin flicked the ball to McAtamney who buried the ball in the Erne net after just ten seconds.

But Fermanagh hit back through some fine long -range efforts from Quigley and led by 0-7 to 1-3 at half-time.