John Kiely: ‘Sure let’s have a crack off it and see how we get on. There’s no pressure on us’ 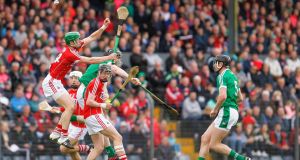 Squad depth was cited as important by Limerick manager John Kiely after he saw his team overcome Cork at Páirc Uí Rinn on Sunday to book a place in the semi-finals of Division One of the national hurling league.

With three minutes of normal time remaining, the sides were tied at 1-17 each following Patrick Horgan’s equaliser for Cork, but Limerick then struck with points from Kyle Hayes, Gearóid Hegarty and substitute John Fitzgibbon, to open up the biggest lead the game had seen since the first half.

Cork did bite back with a late point from a Mark Coleman 65, but Limerick’s goal was not breached.

Kiely paid tribute to the impact made by the players introduced from the bench.

“They did and the final score was a great score,” he said, “he backed himself and he took it on.

“That’s what you want around the place there when there’s opportunities like that. It’s his forte, that’s why he got the gig there at that time. It’s great for the group as a whole, all 38 players we have at the moment and the backroom team, everybody’s working so so hard. It’s just reward.

“They’re back to where they were last year in the semi-final. We’re back with Galway, who we had only last week. Sure let’s have a crack off it and see how we get on. There’s no pressure on us.”

In front of 7,892, this was a game which ebbed and flowed throughout. Limerick had a great start as David Dempsey’s early goal - set up by the excellent Hegarty - put them 1-4 to 0-2 in front.

But then 1-5 without reply from Cork had them in a lead of 1-8 to 1-5, with Luke Meade raising a green flag immediately after he had scored a levelling point.

Three Shane Dowling points, and one by Hegarty, looked to have Limerick ahead going in at half-time, but Alan Cadogan ensured that the teams were tied again at 1-9 apiece at the break.

The second half followed the same tone.

By the 54th minute, neither side had managed to establish a two-point lead, before Dowling’s eighth point put Limerick 1-16 to 1-14 in front. Back came Cork however, with two frees from Horgan, who finished with eight points.

The Shannonsiders though were building up a head of steam. Dowling made it 1-17 to 1-16 and while Horgan tied the game again after he was fouled, the visitors had the stronger finish.

Cork selector Pat Hartnett was disappointed with the result, but felt that the league as a whole has been impressive.

“We are what our record says we are,” he said, “last year, we won zero league games and won the playoff. This year, we won three and lost the quarter-final.

“I’d be positive overall. We intentionally held back on the likes of Coleman and (Darragh) Fitzgibbon, (Colm) Spillane, (Shane) Kingston. They’ve been immense. Five good fellas have come on and performed. That is a positive.