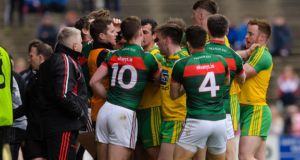 Aidan O’Shea entered this game after 46 minutes, just when Moody’s were about to issue a downgrade Mayo’s triple A rating. They trailed by 1-6 to 0-13 and some of the Donegal supporters among the 14,000 strong crowd were browsing through booking.com or phoning the Dergvale for league final lodgings. Word was that up in Clones Monaghan were having a merry old time against Dublin.

O’Shea’s first act was to dispossess Michael Murphy even as the big Glenswilly man was eyeing up the Mayo posts. Murphy, it should be noted, was streets ahead of the pack at this stage, playing a magisterial game. O’Shea’s next act was to star in a very heated brawl involving ten players in which he squared up with Murphy.

The exchange was enough to pump up the volume in Castlebar to somewhere between full and outright anarchy. The next score, when it finally arrived, was a sweet, outside of the boot dart from Keith Higgins, nominally fullback but now deep in Donegal country as Mayo pressed up on their visitors with rabid intensity.

From the stands came the war cry. From therein, Mayo owned the game. Donegal would not score for the last half hour. In fact, they struggled to take the ball past their own half way. They lost Eamonn Doherty to a red card for kicking out at- who else- Aidan O’Shea after 57 minutes.

Cillian O’Connor, unable to buy a free for most of the day, suddenly got all the target practice he needed. Mayo looked commanding, composed and bullish when the hour came. Donegal suddenly looked young and lost.

Mayo avoided relegation and the match ended with little love lost between the teams. All of which is a long way of saying that the next Mayo person who gives out about what Aidan O’Shea does for the county football team should be run out of town. For better or worse, he is the beating heart of Mayo’s football ambitions.

Do we know anything more about Mayo now than we did at the start of the league? Only that if their soul was reflected, it would look about like Clint Eastwood in the Josey Wales phase of his film career. There is not much they haven’t seen by now. In his analysis, Stephen Rochford stayed away from the westerns but allowed that they have survived a fair few of these kind of wild engagements and stood up when it mattered.

“Probably not even for the full thirty five minutes. But we were in that position and nothing less was going to pull us back into the game. Donegal had played the majority of the football in the first half and we ended up three points down at half time. We needed to play a lot more on the front foot and to hunt Donegal down because they owned the ball for final twenty minutes of the first half and took real reward from it.”

Their reward is that they can disappear for almost two months and re-emerge with their battle plan to lift the Sam Maguire. Donegal, mean time, trooped off the field to ponder the fact that they missed out on a league final by three points.

The last twenty minutes were unpleasant for them but may well provide all the most useful lessons of their league. They bucked expectations by coping with the autumn’s mass-retirement, playing some wonderful football with Murphy orchestrating a half down highly promising young players. This defeat gave an advance preview of the treatment to come: a heavy-hitting team closing down their running game early, a fractured game, a frenzied crowd: coping with this atmosphere will be critical to their summer. Their form didn’t desert them here; they were really on song until Mayo turned the screw, which Rory Gallagher readily acknowledged.

“There were a lot of positives; I thought the first half was exhilarating and in the second half even though Mayo were the stronger team, our boys did not shirk the challenge. We have not done a lot of training over the last month going from game to game and I thought there was an element of tiredness creeping in at the end. You will always be disappointed when you lose but we have to be brave and honest with where we are at and in the second half Mayo brought an awful lot of physicality to the game, they pinned us in on our short kick-outs and they dominated us around the middle. But I am happy with where we are at the moment.”

There are two ways of looking at Mayo’s first half. Glass half-full, they had notched up a slick 1-3 after just seven minutes, with Danny Kirby’s curled beauty the pick of the scores. Half-empty and they contributed just a further 0-2 for the remainder of the half playing with a big wind swinging in from the bacon factory end. Plus, their goal came from a penalty for a foul on Cillian O’Connor which Mark Anthony McGinley, the guilty party, believed was outside the square.

But Donegal ran the show for 25 minutes, slipping into their slow-fast rhythm and finding space for a necklace of wonderful points, including two from Cian Mulligan and another eye-catching contribution from Ciaran Thompson. Even without the Kilcar turbo-diesel-injection of Ryan and Eoin McHugh, Donegal looked comfortable. They kicked 0-11 into the breeze in the first half; nobody would have predicted then that they would only manage a further 0-2. They simply couldn’t cope with the stranglehold placed on them by Mayo. This was full-metal-jacket stuff with ten minutes to go.

“If I had the physicality I would do the same,” said Gallagher.

“You have to give great credit to them [MAYO], they fought really hard and so did we but it was not enough in the end.”

Still, both sets of supporters headed down the town with reasons to be cheerful. Donegal’s future looks bright. And Mayo? Just listen. They believe.