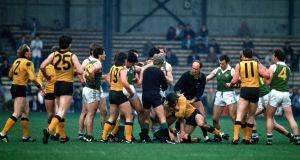 A fight breaks out between Ireland and Australia players in the 1987 International Rules Series. Photograph: Billy Stickland/Inpho

It was 50 years old the weekend before last. On Saturday the latest staging of the International Rules series finds the concept teetering as usual on the precipice. It moves as slowly as any activity that has to be agreed by two large organisations in different hemispheres but its challenges mutate a lot more nimbly.

Instead of agonising immediately about where it goes even in the immediate future, a more interesting question is where did it come from: how did we get to the point where two of the world’s great indigenous games engage in a hybrid contest at irregular intervals with neither quite sure where they stand?

As games, football and Australian rules emerged in different ways and followed different trajectories. The AFL is a big professional sport whereas the GAA organises an essentially community-based association, which features – and is funded by – elite, mass-spectator events.

The GAA was founded as a statement of cultural separatism even though it has the Irish weakness for obsessing over what others make of us. We love to tell anyone who’s listening that hurling is the greatest field sport in the world – one GAA president actually did so at a dinner before an international Test in Australia, to the general bemusement of his audience – but even more we love others to come to that conclusion themselves and preferably without prompting.

There are similarities with the AFL, including a strand of opinion that takes a jaundiced view of other field sports and it was noticeable when the Rugby World Cup was staged in Australia in 2003 Fox Sports, the television rights holder, didn’t bother in the rules citadel of Melbourne to broadcast live any matches apart from Australia’s.

Although the AFL wasn’t established with the GAA’s avowedly cultural remit, Australia in general reflects the anxieties of distant former colonies trying to define and redefine their place in the world.

In an ideal world the AFL might like to have the status of a really successful exhibition sport in the United States but has grasped the reality that engaging in the international series with the GAA is probably the most practical way of raising an international profile.

If the most powerful narrative of identity for Australia and New Zealand came from involvement in the World Wars and the role of the ANZAC forces, that has also proved useful iconography in sporting terms.

New Zealand’s most resonant international sporting engagement comes in rugby just as Australia’s does in cricket and when the idea of legitimising Australian rules football as a bona fide international involvement the imagery was familiar.

Harry Beitzel, who passed away last August, organised the first meeting of Australian footballers and their Gaelic counterparts in 1967. They visited Ireland and wore slouch hats, a symbol so reminiscent of the Australian “diggers” uniform that the Returned Services League was unhappy about the appropriation little more than 20 years after the war.

In 1999 the first staging of the resumed internationals in Australia took place. The AFL had taken ownership of the idea from impresarios like Beitzel and was keen that the series prove a success. Former player Dermott Brereton, who was by then a media pundit, was given the task of managing the home challenge and he openly invoked those images of identity.

Frequently players referred to the honour of representing their country and at the press conference before the second Test, Brereton mentioned how affected he was when first pulling on his squad T-shirt after his appointment.

“I looked down at the coat-of-arms and it was a great feeling. At the first Test I was talking to a 70-something man who hadn’t been to watch a game of footie in 20-odd years. He told me the last time he played under the coat-of-arms was on the Kokoda trail.” (The Kokoda trail was an engagement between the Australian army and the Japanese in Papua New Guinea during the second World War.)

For the GAA, the novelty of international representation is part of the vernacular of the series. In a way it’s a natural extension of community identity: club, county, province and now, country – just the final concentric circle in the ripples of allegiance.

But the world changes all the time. Things aren’t as they were in 1967 or 1998 or even 2007. There are more clubs in the AFL now and less time in the close season. For the GAA, the rights of clubs have been incrementally focused on in recent years.

When the international series was resumed nearly 20 years ago, there would have been no question of a player not travelling to Australia because of a club fixture. When Ciarán Whelan had to play a match with his club, Raheny, the day before an international in Croke Park, one of his Ireland colleagues was incandescent with anger when talking about the scheduling gridlock.

This year an entire batch of players aren’t travelling because of club commitments. One former international said in conversation that whereas clubs used to be thrilled to have players selected for Ireland duty – home or away – and wouldn’t dream of asking them to prioritise club training over international commitments, that dispensation doesn’t apply any more.

For the first time the All-Ireland champions are completely unrepresented on the national team because of prior commitments but also, as acknowledged by team manager Joe Kernan, the need to blow off steam after a three-in-a-row.

Changes to the fixtures calendar may create additional time and a permanent place for the internationals would be welcome but maybe the culture of both the AFL and the GAA has reached a stage at which it no longer has space for what once beguiled as the infinite possibility of an international dimension.