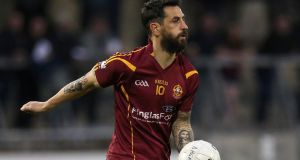 A transfer for former All-Ireland winner Paul Galvin to return to his native Finuge club in Kerry has been completed.

The three time All-Star and four time All-Ireland winner joined the St Oliver Plunkett/Eoghan Ruadh’s club last year, and they were subsequently knocked out of the Dublin club championship by Castleknock (AET) in the second round.

The 38 year-old had a year previously transferred to Kilmacud Crokes to play hurling.

The Athlone based club - All-Ireland finalists in 2012 - have recruited the services of the Castlerea St Kevin’s corner forward who won a Connacht championship with Roscommon in 2010.

A regular for the county side for almost a decade after making his breakthrough in 2004, the expert free-taker has also won three club titles with Castlerea. The last of those came in 2009.

Despite winning four out of six county titles before 2014 - and a Leinster title - the Athlone based Garrycastle club have dipped in recent years with St Loman’s dominating. Heneghan is believed to be working in Athlone.