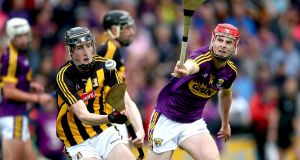 Evan Shefflin’s 17th-minute goal proved crucial as it helped Kilkenny to an eventual two-point victory over a battling Wexford side in this exciting Leinster Under-20 hurling championship final at Innovate Wexford Park on Wednesday evening.

Kilkenny suffered a huge blow before the game when senior star attacker Adrian Mullen was pulled from the side with no explanation given regarding his withdrawal. But many believe it’s because of three huge senior games over recent weeks, two against Wexford and Cork last Sunday.

Despite the greasy underfoot conditions, both sides served up an entertaining opening 30 minutes, with Kilkenny not showing the effects of the absence of Mullen, looking threatening right through this opening period and stretching the home defence at every opportunity.

Wexford, playing with the breeze behind them, got off to the ideal start with two Ross Banville frees inside the opening six minutes, but it was Kilkenny who responded positively with points from James Brennan and Stephen Donnelly to tie the sides at 0-2 each after eight minutes.

Kilkenny looked stronger physically and were playing the more skilful hurling, with the sides going on to exchange points through Seán O’Connor and Eoin Cody, while Kilkenny took the lead for the first time through a Niall Brassil pointed free at the end of the opening quarter.

With Shefflin winning a lot of ball in midfield, Kilkenny got the crucial breakthrough after 17 minutes. Cody won possession to the right of goal, saw his powerful shot deflected to one side by keeper James Lawlor, but it was Shefflin who found himself in open space to crash the breaking ball to the net, giving his side a 1-4 to 0-3 lead.

Points from Banville frees and O’Connor kept the home side in touch, while Brassil was on target with two place balls, leaving Kilkenny the more comfortable side, leading 1-7 to 0-7 at the interval.

As the sun broke through, both sides opened the second half on a bright note, exchanging points through Brassil and Charlie McGuckin. Wexford then enjoyed a purple patch as two Banville points left the minimum separating the sides, 1-9 to 0-11.

When Banville pointed a free almost immediately to bring the sides level it looked as if Wexford were back in the game, but Kilkenny responded with three unanswered points through David Blanchfield, Sean Ryan and Cody to bounce back into a three-point lead, 1-12 to 0-12, after 41 minutes.

Despite this setback, Wexford kept on battling, with Banville and Brassil going on to exchange pointed frees, but it was Kilkenny who led 1-16 to 0-15 entering the closing five minutes. In a dramatic finish, Wexford laid siege to the Kilkenny goal, producing points through subs Ben Maddock and two from Chris Turner to reduce the deficit to 1-17 to 0-18, but it was Kilkenny who held firm in the five minutes of additional time.

1 Tipping Point: DeChambeau’s transformation raises questions, but who will ask them?
2 Ken Early: Resurgent United can be the top team – in Manchester
3 Monica Seles: The warrior queen who could have been the best ever
4 John Maughan: This year's All-Ireland will be tainted, whoever wins it
5 The tragic tale of George Chuvalo – Muhammad Ali’s toughest opponent
Real news has value SUBSCRIBE