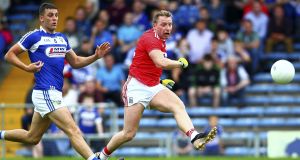 Cork’s Brian Hurley scores his side’s second goal against Laois, he has already scored 5-7 in the championship. Photograph: Ken Sutton/Inpho

Brian Hurley is the football championship’s most prolific goalscorer, he stays in the inside line and when the ball goes in it sticks.

Against Dublin last weekend Hurley never touched the ball further than 35 metres from goal. So far this summer he has received possession outside of the opposition’s 45 only twice.

He had only eight possessions against Dublin, but won every ball that went into him, scored 0-3 and was directly involved in two goal chances. Cork had four goal chances in all, they took only one, Hurley missed a one-on-one chance he created for himself and assisted another missed attempt.

Traditionally an inside forward staying within 35 metres of the opposition goal would be the norm but Hurley is a dying breed in the modern game. An out an out poacher, his first thought is always goal and there’s no better man to find the back of the net. Not this year anyway.

Hurley has scored more goals than any other footballer so far in the 2019 football championship. In four matches he has scored five and, including his last league game against Armagh when the Rebels first began to show their summer form, he has seven goals in his last five matches.

Cork have made 25 goal chances in those four matches, and Hurley has been directly involved in 11 of them. Either assisting or shooting. So that’s almost three per match for the prolific No 14.

Of all the ball played in to him – in the Munster semi-final against Limerick, the final against Kerry, their qualifier win over Laois and first Super 8s match against Dublin – he has only failed to secure possession on three occasions. And twice he won the ball and was then turned over. He makes fantastic, varied runs and does not waste good ball.

Marquee forwards such as Michael Murphy will switch in and out, deemed too good to be away from the action for a prolonged period. Others come out as part of their team’s defensive system, often leaving them behind the play when the ball is won back.

Hurley though positions himself inside the 13m line, he’s two-footed which allows him to make runs off either side. He’s always looking for the ball in behind and is strong and quick enough to win it out in front too. Most impressively though, in a team of ball carriers, he keeps the team’s shape and backs himself to do more off less in the right areas.

He’s averaging just over 10 possessions per match in the team’s last four encounters. His positioning gives Cork an out ball, as well as preventing the opposition from committing to a full press against their running game. While Cork's man-for-man marking system allows him to pick up the last defender and remain a constant threat.

The player closest to Hurley in the goalscoring charts is Meath’s Michael Newman, although half of his goals have been from the penalty spot. Four players have scored three goals – Hurley’s team-mate Luke Connolly has also raised two green flags via penalty kicks, and Meath’s Bryan Menton has three from midfield.

Armagh’s Rian O’Neill scored three goals in four matches before his team’s third round exit, while Matthew Fitzpatrick went one better with three in as many games for Antrim.

The players remaining in the championship who have scored two goals are Brian Fenton, Michael Dara Macauley and Con O’Callaghan for the Dubs, Jamie Brennan for Donegal, Roscommon’s Shane Killoran, James Carr scored both of Mayo’s goals in their win over Galway, and Cathal McShane and Darren McCurry of Tyrone.

Of the 125 goals scored so far this summer, no team has contributed more than Cork or Dublin who both have scored 11 times in their four matches. Of the teams in the Super 8s, Kerry, Donegal and Mayo have scored as many goals as they have played matches. That leaves Kerry with the least amount having played only three championship games thus far.

Roscommon have scored six goals in four matches (while conceding none) and Meath have the same ratio with nine in six. Tyrone have played seven matches and scored eight goals.

They have also conceded six, one less than Cork after playing three matches fewer. Mickey Harte’s team have actually conceded 15 goals in 17 matches across the past two championship campaigns.

So between the Rebels and Tyrone they have scored 19 goals and conceded 13 ahead of Saturday’s Super 8s encounter.

Hurley ripped his hamstring off the bone in 2016, then suffered a demoralising recurrence of the injury a year later. His footballing career was in doubt after both setbacks. But he took on surgery without any guarantees, and all the rehab twice over. Now, at 27, Cork fans are finally seeing the Hurley who starred as they reached the All-Ireland minor final in 2010 and the under-21 decider in 2013.

He’s had to be patient, and against Tyrone’s packed defence this weekend that patience will be put to the test in a different way.

He may have to wait longer than usual, but with this Cork team's quality and belief, and Hurley in their ranks, the chances will come. The problem is, with Cork’s man-for-man defensive plan, there’ll be plenty of chances at the other end too.

Without any cover, one take-on or loss of concentration opens the whole thing up to overlaps. Against Kerry, Tom O'Sullivan scored 1-1 from half back, and last weekend the Dublin backs scored 1-3 and their midfielders finished with 2-1.

But Cork ultimately still back themselves to score more - after all they do have the championship's number one patient poacher.

1 In turmoil on and off the pitch: Where did it all go wrong for Barcelona?
2 College football turns blind eye to Covid-19 by risking players' health
3 The Best Of Times: Harrington stares down Garcia in epic Claret Jug battle at Carnoustie
4 Limerick’s Shane Dowling forced to retire at 27
5 Coronavirus has turned Viktor Hovland into long drive champion
Real news has value SUBSCRIBE

Tactical test awaits Dettori and English King from stall one at Epsom 16:09
Six to go forward for Aidan O’Brien in Saturday’s Epsom Derby 15:15
‘Several’ players have withdrawn from snooker World Championship 13:48
Limerick’s Shane Dowling forced to retire at 27 12:43
Martina Navratilova a leader in her time, and for ours 11:59
Crossword Get access to over 6,000 interactive crosswords