Mark Duncan: GAA must tread warily if it comes to divisive Border poll

Less prescriptive it has sought to be in politics, the more reflective of Ireland it has become 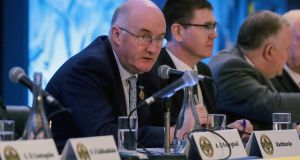 John Horan: said it was pretty clear where the GAA would stand if a Border poll was to be held. Photograph: Laszlo Geczo/Inpho

Just over 60 years ago, at a Croke Park event to mark the anointing of a new Hogan Stand, the then president of the GAA, Dr Joseph Stuart, made a speech in which he affirmed that his Association had “always stood for a united Ireland”.

Organisationally and culturally, the country’s largest sporting body remains all-island in purpose and with a mission – it has more than one, of course – to strengthen a 32-county “national identity”.

Words have meaning and speaking on RTÉ Radio last March, Jarlath Burns, the former Armagh footballer and prominent GAA administrator, seized upon these and others to declare that in the event of a future Border poll the GAA could neither logically nor ideologically adopt a position of neutrality.

If partition had created that Border, it took the introduction of customs barriers in 1923 to render it truly hard

It already had a position and it was clear-cut, he argued. On the surface of it at least, the GAA’s current president, John Horan, appeared to agree. Speaking subsequently in Derry, he said it was pretty clear where the GAA would stand if such a poll were held, although it was significant that he didn’t explicitly suggest for the Association a potential campaigning role.

This ambiguity was most likely intentional. It might even be considered to have been well-judged. The GAA will be deeply impacted by what happens with the Brexit-Border question but it has a lot of hard thinking to do before it hurls itself into a debate for which it is presently unprepared.

To be fair, it would be hard to see how it could have been anything otherwise.

The Brexit vote caught many organisations off-guard and, in the three years since, this ostensibly English nationalist project has been swinging a wrecking ball at the relative stability delivered by the Good Friday Agreement and the key understandings that have underpinned it.

That agreement, alongside the shared membership of Ireland north and south in the single European market, has been utterly transformative of everyday GAA experiences along the Border. Long closed roads have reopened, villages and towns have been reconnected to their natural hinterlands and there has been the freedom of movement to and fro across what has become an essentially invisible frontier.

The past was indeed a different country.

Even before the Troubles brought the imposing security infrastructure – the watchtowers and soldiers – the Border between north and south had been a cause of disfigurement and disruption.

If partition had created that Border, it took the introduction of customs barriers in 1923 to render it truly hard. In June of that year, as roads closed and the requirement for checks and permits took effect, a senior GAA official complained to an Ulster Council meeting that the new restrictions affected the Association “more than any others” and “bordered on the ridiculous”.

His complaint mattered not. The ‘ridiculous’ became the reality – a defining one – and remained so for several decades that followed.

Brexit has brought this problematic past back into focus and opened up a renewed discussion on the constitutional future of Northern Ireland, the Border poll chatter being amplified by a growing nationalist disenchantment at what barrister and GAA pundit Joe Brolly has described as the “sneery” and “contemptuous” attitude adopted by the DUP towards them on such issues as the Irish language.

In many ways, this drift in popular nationalist sentiment is as understandable as the aspiration towards unity is legitimate but, as the latest Northern Ireland Life and Times survey shows, that does not mean that the time for a Border poll is now.

However, what is required in the near to medium term is some serious consideration about what such a poll would entail if the direction of travel, demographically and attitudinally, continues as it is. After all, referendums, as Brexit and Ireland’s own experiences bear out, are about more than mere votes. Process matters, as does a clearly understood vision of the ultimate destination.

More so than talking up a possible advocacy role in some distant Border poll, it is as part of this process and in the articulation of that vision that the GAA might make its most fruitful contribution.

And it might start by clarifying its own relationship with Irish nationalism which, while historically deeply rooted, remains complex and in places contradictory. To be clear, to clarify does not mean to completely jettison.

It means to acknowledge that ideas around nationalism and identity are fluid and ever-changing. It means to bring into alignment the Association’s official guide and various mission statements with how the GAA actually operates and how it is experienced and understood by its own membership, as well as by those to whom the Association would like to extend that membership.

Ultimately, it means the GAA choosing which version of itself it wishes to be.

Is it the GAA which proclaims in the preamble to its official guide that because “she has not control over her national territory, Ireland’s claim to nationhood is impaired” – an assertion that is difficult to reconcile with a Good Friday Agreement democratically endorsed by the Irish people in referendums north and south?

Or is it the GAA that commits, in the words of its Ulster Council’s mission statement, to promote the “values of respect, tolerance and the vision of a shared future as outlined in the Good Friday Agreement”?

Deciding on which these assertions speaks most faithfully to its contemporary values might go a long way to helping the GAA to determine how it might handle the Border poll issue should it actually arise.

But it might equally draw on the lessons of its own history, for much of which it prescribed a very narrow vision of Irishness and Irish identity. The consequence of this was that for too long the GAA could often be defined as much by whom it excluded as embraced.

A lot of that has changed, of course. Across the best part of the last half century the GAA has, in its club model at least, reimagined itself as a community organisation and gradually, perceptively – and in keeping with wider social and political developments – extended the reach of that community.

Gone is the Association whose general secretary once declared that it would be strengthened by the discarding of disloyal members.

Gone are the suite of exclusionary rules that allowed for an easy, dismissive pigeon-holing of the GAA and its members.

In its place has evolved is an Association whose clubs hold a clearer mirror to the diversity of their communities than at any time than before.

No doubt the trappings of Irishness will continue to make the GAA a hard sell to unionists – as, no doubt, will the social media footage of Tyrone players doing the rounds this week – but the lesson of recent decades should not be lost on the Association if and when it comes to consider jettisoning its political neutrality in a future referendum.

And that lesson is this: the less prescriptive it has sought to be in its politics, the more genuinely reflective of Ireland it has managed to become. Just what a national organisation should be.

Mark Duncan will moderate a discussion on ‘The Irish Border & the GAA. What Now’ the Galway Arts Festival on July 20th.

He will also join a panel discussion on ‘Does Sport both Unify and Divide Ireland’ on July 21st. https://www.giaf.ie/talks/upcoming

1 Tipping Point: DeChambeau’s transformation raises questions, but who will ask them?
2 Ken Early: Resurgent United can be the top team – in Manchester
3 Monica Seles: The warrior queen who could have been the best ever
4 The Game Changers: How Jonah Lomu’s dramatic arrival heralded rugby’s new dawn
5 Lewis Hamilton: I was ‘silenced’ over Colin Kaepernick
Real news has value SUBSCRIBE