Meath can take some heart from history with Mayo 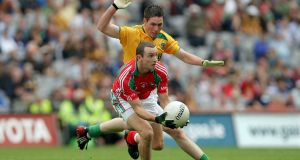 The meeting of Mayo and Meath in Sunday’s Super 8s clash at Croke Park revives an old championship rivalry. The counties will have met in All-Ireland competition for seven of the last eight decades – the 1970s being the exception simply because Mayo didn’t win a single Connacht title that decade.

Despite the long history, they have generally met just once a decade but twice in the 1950s and 1990s, allowing for replays in the All-Ireland finals of 1996 and ’51.

That latter year saw Mayo’s only victory of the eight meetings, which continues to have immense significance for the county, as it was the last time they won the All-Ireland. It’s been a rather more fruitful fixture for Meath, whose five wins have yielded four All-Irelands, including their first in 1949, 1967, 1988 and 1996.

That last year was the most memorable of the modern clashes, Meath winning by a point after a replay that saw Mayo’s Liam McHale and the winners’ Colm Coyle sent off in the seventh minute. Meath led only twice in 140 minutes but crucially, were ahead when the whistle went.

Of all Mayo’s heartbreaks in the past 30 years and nine finals, it was probably the closest they had come to winning the All-Ireland.

The most recent meeting was also a quarter-final when Mayo, as Connacht champions, lost in 2009. None of the Meath players that day have featured in this year’s championship – Mickey Bourke played in the league – but four of their opponents have: Donal Vaughan, Keith Higgins, Andy Moran and Aidan O’Shea, then in his rookie year.

There is also a link to the 1988 semi-final when a Liam McHale-inspired comeback got Mayo back into contention before Meath reasserted themselves. Finian Murtagh, currently one of Andy McEntee’s selectors, came on a as a replacement for Bernard Flynn that day.

On a coincidental note, twice All-Ireland winning manager with Galway John O’Mahony bookended his Croke Park championship career managing his own county against Meath, beginning in 1988 and ending in 2009, a year before he stepped down.

Although there was no immediate official confirmation of the injury, which took place at training on Wednesday night, which required further assessment on Thursday, it was reported on BBC Northern Ireland that he had broken his ankle and privately, county officials were fearing the worst.