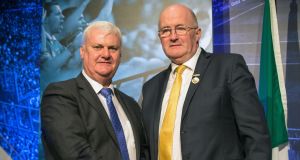 New GAA president John Horan has identified the over-emphasis on county development squads as an issue for his presidency. The first native Dubliner since Daniel McCarthy in 1921 to hold the office, he made his views known at the first press conference of his presidency.

“I think all the way from under-13 to under-20 has to be looked at. We need to create a proper player pathway. I don’t think people are acting out of malice but some are getting carried away with their own self-importance (judging) by the number of training sessions. Young players should be dipping in and out of county squads.

“No young lad should be deemed a success or failure and I think young lads going to county development squad training should actually go in their club colours and keep it in their head that they’re still a club player.”

He said that he would consult with experts in the area and whereas rule changes wouldn’t necessarily be needed, funding and competitive outlets for the age groups were potential means of regulating the situation.

During his address to the GAA annual congress at Croke Park on Saturday, he had initially raised the matter.

“When all is said and done, we are a sporting body and nothing is more important than our games and the people who play them. As a former inter-county selector and manager at under-age level, I have a concern about the manner in which inter-county development squads in particular are being allowed to grow beyond all measure.”

“The outgoing Árd Stiúrthóir has exposed some stark realities in this regard and I believe the answer to these questions rests – not with Croke Park but with each and every one of the clubs who operate around the country.

“What does the amateur status mean to us as GAA members? If it is something that we hold dear then it demands actions not words and leadership at club and county level to make it a core value in how we conduct ourselves. It’s clubs and counties who have the power to control the amateur status and set a standard that illustrates its importance to the association.”

Saturday’s clár was low-key. Of the motions that attracted any pre-congress attention, the proposed ban on gambling companies sponsoring GAA activities was passed, as was Offaly’s motion to align hurling’s under-21 championship with football by dropping the grade to under-20.

The Club Players Association floated the idea of making every delegate at congress answerable for their votes was shot down by 83 per cent of delegates. Wexford’s Liam Griffin proposed the motion, asking in his formal reply to an at times spiky debate: “Why are we afraid of being honest?”

Tipperary’s motion on defining a melee for the purposes of the infraction, “contributing to a melee” as “a minimum of five persons” was well defeated, 74-116 (31-69 per cent). Earlier, a Central Council motion, providing for the option of a less serious (and therefore more prosecutable) infraction of “minor physical interference with an opposing team official” – as opposed to an “assault” – secured overwhelming support.

The new president also reacted to the gambling sponsorship ban by saying that the association was “taking the lead out of social responsibility.