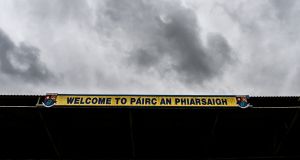 Longford got back to winning ways at Pearse Park. Photograph: Tom Beary/Inpho

Longford got back to winning ways but made hard work of their win over Wexford in Pearse Park on Sunday afternoon.

It was a sluggish performance from the Midlanders who didn’t put in the performance they are capable of. Wexford were dogged but were reduced to 14-men in the 51st minute when Daithi Waters was sent off for striking Connor Berry.

Robbie Smyth got the game’s only goal in the 40th minute flicking the ball to the net after a fine move involving Daniel Mimnagh and Darren Gallagher.

That put three between the sides and Longford were able to push on with Gallagher, Donie McElligott, Smyth, Michael Quinn (‘45) and Pauric Gill all tagging on points.

Rian Brady and Connor Berry opened the scoring for Longford but Wexford were back in the game in the 17th minute when Robert Frayne drew the sides level. Longford edged ahead before the break with a Smyth free giving them a two point advantage, 0-7 to 0-5.

The sides were level for a second time in the 37th minute but Longford responded with a goal from Smyth that set his side on their way for a victory which virtually secures their place in Division Three for next yea,r and leaves Wexford with no points from their four games.

Armagh’s 1-15 to 1-9 win over Offaly in Bord na Mona O’Connor Park yesterday was both routine and predictable.

While Offaly fought hard and played with honesty, they never looked like lifting themselves out of relegation trouble while it was Armagh’s fourth win on the trot as they continue their march towards Division 2 football.

Playing with the wind on their backs, a Gregory McCabe goal put them 1-5 to 0-2 ahead after 10 minutes. Sean Doyle replied straight away with a three pointer for the home side but Armagh were full value for their 1-10 to 1-5 interval lead.

Three quick points at the start of the second half put them eight clear and the game was out of Offaly’s reach. Armagh probably could have won by more from here but they didn’t really push it on. At the same time, they were always in the driving seat and never in the slightest danger of losing.

It was a case of job done for Westmeath in Mullingar on Sunday, but Colin Kelly’s troops will need to be a lot more ruthless when Division Three table-toppers Fermanagh come to town next weekend.

Despite losing key scorer Adrian Marren to injury at half time, plucky Sligo had the hosts’ lead down just a point midway through the second half. An upset was well and truly on the cards.

Westmeath had looked nicely poised by the 24th minute, with John Heslin (frees), Tommy McDaniel and Luke Loughlin helping them into a 0-9 to 0-4 lead. However, Marren shot two before the break as Sligo gobbled up three consecutive Westmeath kickouts to put the pressure on.

Pat Hughes ably deputised for the injured Marren, and it was his point which reduced the deficit to the minimum on 55 minutes, after a brace of frees from Liam Gaughan.

However, a magnificent point from Westmeath’s James Dolan moments later supplied the requisite psychological blow, while Heslin, Ger Egan and Kieran Martin all scored late on to seal two points for the Maroons.