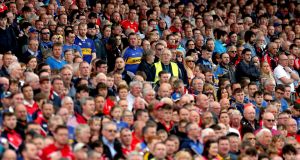 Semple Stadium last Sunday for the clash between Tipperary and Cork. Attendances are well on the way to proving a bonanza for the respective provincial councils. Photograph: James Crombie/Inpho

It may be that the operatic grandeur of Waterford’s woes in Cusack Park last Sunday has obscured the bigger picture but there have been a couple of warning signs in the progress to date of the new hurling championship structures.

It’s been a frantic couple of weeks for the game and it has to be acknowledged that some of the indicators are positive. Primarily, crowds have held up extremely well considering the absence of sudden death, previously believed necessary to raise the pulse rate of spectators.

Initial comparisons show that overall attendances are well on the way to proving a bonanza for the provincial councils. For example, the Munster championship after two rounds has more or less equalled the attendance total of the pre-provincial final rounds last year, 81,034 against 82,439, but with another three rounds to come.

It’s been much the same story in Leinster after three rounds. Last weekend’s historic migration by the provincial championship to Connacht yielded a crowd of 18,775, which was actually bigger than either the draw or replay in Tullamore – 13,162 and 17,059, respectively – when Kilkenny and Galway last met outside of Croke Park in what was a sudden-death semi-final.

We can probably enter a small caveat. Attendances at the early football qualifiers were huge until the novelty wore off and currently in both provinces there are above average levels of competition, which adds to the attraction. But in fairness to the championships at present, they are proving very well attended.

The teams are also getting the hang of the format in terms of emotion. In the first Munster fixture in Limerick, there was a feeling that the atmosphere suffered somewhat because of the absence of sudden death. Scenes at the end had to factor in that, despite having been beaten, Tipperary weren’t out of contention.

A week later, though, there was no shortage of tension, as Tipp had to battle frantically to pull the match against Cork out of the fire. An interesting point was made by Pat Nugent on this newspaper’s Added Time podcast that there was a wholly different feeling to the draw than would be the case in the old knockout format.

In the past, draws tended to be greeted as slightly unsatisfactory in that they all but nullified the afternoon’s contest. Yes, there were often teams more relieved than their opponents not to have lost but one point gained is a far more tangible reward than the prospect of having to do it all over again.

For instance and allowing that finals need a winner – and Tipp will be aware of this – in its immediate aftermath the drawn 2014 All-Ireland was being hailed as a masterpiece with its high scoring and drama but is it really remembered as such now, given that the canvas was painted over by a more prosaic replay, firmly won by Kilkenny?

So, given all of the positivity, what are the warning signs?

The GAA has been trying for understandable reasons to secure best practice in its elite competitions but the model is essentially professional with its week-in and week-out scheduling and yet the players remain amateur.

Already managers are saying that their panels may need Mondays off, such is the intensity of the fixture list.

Over the past 20 years, momentum has been towards bigger, more powerful teams. The relaxation of sudden death has protected against the surprise defeat of favourites, which in competitive terms makes sense because championships should be won by the best teams but it militates against the great euphoria of an unfancied county terminating their opponents’ summer on one fine afternoon.

Another example, expanding the number of replacements allowed onto the field, obviously benefits those with deeper playing pools.

Waterford came into the provincial championship with a shallow enough panel and the accumulated calamities of last Sunday – together with some they had picked up previously – leave Derek McGrath with the possibility of having to line out without nine of the team that started last year’s All-Ireland final.

It is obvious from Tuesday’s bleak press release that under any format they would have struggled, as a number of the injuries are long-term, but the difficulty for any team like Waterford in coping with even less daunting setbacks is exacerbated by having to play four weeks running.

By comparison with last year when they wouldn’t have been due up in the qualifiers until at least the beginning of July, Waterford now face their summer being over by mid-June.

It was noticeable but maybe coincidental that the Leinster teams on their third straight week, Offaly and Kilkenny, were both well beaten at the weekend. Kevin Martin said his Offaly team had been fairly flattened by the constant activity and now they must play the defining match of their year – the effective relegation play-off with Dublin – on a fourth successive weekend.

That luck of the draw is an issue. Tipperary and Waterford were the counties allocated four successive weeks of matches, at either end of the championship fixture list – just as Offaly and Wexford have been in Leinster. Will this be rotated next year?

Then there is the lack of television coverage, which means that the general hurling follower – admittedly spoiled by years of one or two big matches every week – literally can’t keep up. The space for taking it all in has contracted dramatically.

There may have to be a case for loosening the schedules a little in the future, which would be challenging in a fixture list designed to reduce the inter-county season.

It’s too early to be definitive about the impact of the new format, which has already had positive impacts but there may come a point where form starts to mould substance.