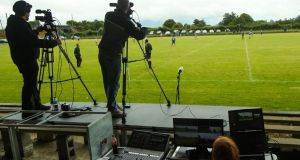 Necessity has been mothering plenty of invention in the GAA during the past six months but in one vital area, communication, a trickle of technology has turned into a torrent.

This year, with its enforced alienation of match goers, is by no means the first experience of live streaming matches, which adventurous clubs have been dabbling in for a while and which Croke Park have been harnessing for the diaspora on the GAAGO platform in conjunction with RTÉ since 2016.

It has, however, provided a massive stimulus, according to Noel Quinn, the GAA’s senior marketing and media rights manager.

“You’d have to call it a success. What has surprised me has been the phenomenal mobilisation nationwide. There have varying levels of that success but at this stage every county has streamed a live game and if you had said that six months ago they’d have been saying, ‘not for us’ and ‘maybe next year’ but needs must in the circumstances.

“We’ve been supporting and advising county boards – as much to warn off anyone trying to take advantage. We’ve protocols in place that help clubs to protect themselves as well as guarding our national rights.”

In the rush to bring fixtures to club members, who have either struggled to secure tickets in the context of the old limit of 200 at a match (de facto, closer to 100) or else have been completely shut out by the Government directive to play fixtures behind closed doors, have been accessing live streaming services or Facebook links.

This has provided a vital link, which is also proving a source of some revenue, with streaming subscriptions passing 10,000 in both Wexford and Galway.

Quinn says that whereas television and particularly the big terrestrial stations continue to be the most effective tools of games promotion beyond physically heading to the playing field and coaching youngsters, the broadcast landscape has changed almost beyond recognition during his 13 years in Croke Park.

“Broadcast is our mass-exposure vehicle. Traditionally it has been TV but the next deal I’ll be working on with Peter McKenna [GAA commercial director] will run from 2022 and will be my sixth media rights cycle in Croke Park. It’s crazy the change and evolution since my first at the tail end of 2007.

“Media rights used just be sold with no stipulations, which was a direct sale for a fee but increasingly, the GAA has adopted what’s called a ‘moderation’ position in which broadcasters are asked what fixtures they want to show and how they intend to present them.

“We’re still maintaining that traditional linear relationship with the television partners but we’ve expanded into the OTT space [Over the Top – technology that delivers streaming straight to the consumer], which is huge in recent years and driven by sport.

“It’s why Amazon are getting into sport, why Disney Plus have merged with ESPN. Sport is the last bastion of live viewing. Netflix and Apple TV have conditioned people to pay and watch on appointment. It’s come into sport, Ireland and the GAA and when GAAGO was set up in 2014 that was our first step into OTT.”

The word he most uses is ‘balance’, which describes the trade-off between allowing optimal access to streaming services while at the same time respecting the interests of the established media rights holders.

He references the permission granted by the latter for live streaming to go ahead at the same time as their terrestrial broadcasts, which is at odds with one of the most established principles of media rights – avoiding wherever possible a clash between rights holders.

“Kudos to RTÉ and TG4 for their generosity in allowing streaming to happen as well as providing a quality offering on television. They knew that it was cannibalising their rights but only in extenuating circumstances.”

Quinn also reflects on the irony of the firestorm of controversy that attended the first rights issue to Sky six years ago on the question of awarding championship rights to subscription television.

“It’s been an interesting process. Society has been conditioned to accept that it will pay for Spotify and Netflix and is now okay with paying for Sarsfields against Clarinbridge in a game they wouldn’t see otherwise.”

Another challenge on the horizon and one not fully resolved yet is how to deliver satisfactory coverage of the proposed intercounty championship, scheduled from October, in the context of a jam-packed schedule and the possibility of it being played behind closed doors or to tiny capacities.

“It’s still a work in progress because there are so many moving parts. Normally we have an 18-week championship and 45 live games. We now have a nine-week championship, half the amount of time. As an amateur association we don’t have Friday night lights or midweek matches so there’s a limited number of slots, Saturday and Sunday.

“We’re going to have to look at particular time slots and also things like venues with no floodlights and same-day finishes.

“RTÉ and Sky will announce their respective schedules in the next few weeks. It will be a challenge because if people can’t attend we need to get as much coverage as possible, live TV and streaming.

“Also bear in mind with other sports like soccer, rugby, athletics and every other sport that’s been back-logged to Q3 and Q4 this year, there’s going to be a drain on technical services personnel. Getting this done will be a mammoth task.”