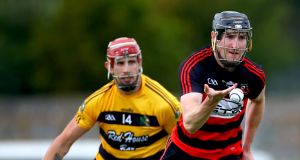 Whereas the plaudits for Wexford’s split-season hurling championship were well deserved, it should be noted that neighbours Waterford devised the same structure. They also endured something of the same testy reactions from officious bystanders to a perceived rush to clear the decks for the county hurlers.

Yet the same positives also attached to it and on Sunday, a week after Wexford declared it a wrap, Waterford roll the credits on their hurling championship. It has become something of a franchise, as Ballygunner are on course for a seventh successive title.

Their demeanour to date hasn’t suggested much self-doubt, and if opponents Passage relish the status of underdogs, they’ve got it.

Ballygunner have turned into a powerhouse. Founded in 1954, the club began life in a small village outside Waterford city, but over the years has been both swallowed and expanded by urban encroachment.

Now based effectively in a suburb with housing estates feeding the population, Ballygunner has made the most of its evolving circumstances, winning multiple titles at minor and U21 level and nearly getting their second team up to senior as well.

The champions have become self-generating. Just one-third of the team that started the current sequence in 2014 are likely to start on Sunday in Walsh Park. Although the club has provided a number of marquee players for the county down the years, the emphasis is on the quality rather than quantity.

Given the profile of Ballygunner within the county, it is maybe surprising that just three All Stars have made their way to the club: former manager Fergal Hartley, Paul Flynn and, of the current side, goalkeeper Stephen O’Keeffe.

But by the standards of a club side, they are significantly crewed by county seniors and former underage players.

There has been a relentlessness to their performances this year. Maybe this has been inspired by the lingering disappointment of losing their provincial title a year ago against Tipperary’s Borris-Ileigh, even if that particular loss won’t be remedied in 2020, with the county final representing the end of the road in this Covid season.

Dessie Hutchinson, a major hurling find on his return from professional soccer, is reckoned by one seasoned observer to be “four times the player” he was last year, assisted by a natural improvement brought on by further practice and the opportunity to play optimum conditions for hurling.

He is running 6-19 at full forward from play in four matches.

Passage weren’t considered likely qualifiers from their group, as they are in the process of rebuilding, but they battled through, defeating the more favoured Mount Sion in the semi-final and hitting 0-26 in the process. Distinguished former county player Noel Connors is still playing with the club, but despite having all the mental attributes of the top-class defender he was for so many years, he lacks the pace to go one-on-one with Hutchinson; however, Passage are unlikely to repeat Lismore’s mistake of leaving the lethal attacker with just one marker and a few acres for company up until half-time, by which stage he had harvested 2-7 from play.

Passage got as close as anyone to beating Ballygunner in the group stages, but that was still a distance of 11 points. They have the distinction of being the last club to defeat the champions in the county, in 2013 when a late dam-burst of scores got them over the line.