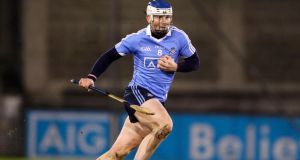 Dublin hurler Liam Rushe has welcomed the prospect of a new GAA centre on the southside of the city. Speaking at Thursday’s launch of the Bord Gáis Energy sponsorship of the All-Ireland hurling championship, he was responding to speculation that the county board is nearing the conclusion of a deal to purchase the Spawell site just outside Templeogue.

“That would be great,” he said. “I haven’t seen any commercial prospectus on that. The talk I heard was of a centre of excellence which we could definitely do with. In the past couple of weeks we’ve been predominantly based in DCU. There are some nice facilities there; it’s very good.

“We do some sessions in UCD to keep some of the deep southerners happy.

“It would be nice to have a place to put our own stamp on and really say: ‘This is the home of Dublin GAA.’

The site, on which the county board was the under-bidder when it was put on the market by Nama in 2015, would also have the potential for development into a 25,000-capacity stadium. Currently the footballers play league matches in Croke Park whereas the hurlers move between there and Parnell Park, which has a capacity of just over 13,000.

“That size probably would suit big-time for league matches, in both codes,” according to Rushe. “You could create a serious cauldron in early Leinster matches as well but I don’t know if they’d want to move them out of Croke Park.

“It would probably be another good venue. The centre of excellence is key. I know they’ve wanted to modernise Parnell [Park] for a long time but just given the parameters there and the proximity of the residents and the golf course there they can’t. I suppose they’re getting frustrated with that. Maybe that’s why they’re casting eyes on the Spawell.”