Cork’s Patrick Horgan out to put 2016 far behind him 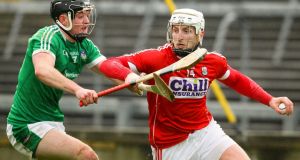 Patrick Horgan in action for Cork against Limerick’s Stephen Cahill in the Munster Senior Hurling League at the Gaelic Grounds. Photograph: Ken Sutton/Inpho

If Patrick Horgan always appears to be baffled when he reflects on the state of Cork hurling and its slide in the past couple of years, he has good reason.

As someone who hit what would have been one of the greatest winning points in any All-Ireland with a minute left of the 2013 final only for the team to concede an equaliser in time controversially added on, he came within breathing distance of the game’s highest achievement.

What has happened since, though – starting with the subsequent replay defeat by Clare and right up to last summer’s first championship loss to Wexford in 60 years – always leaves him trying to explain what’s gone wrong.

“Yeah, I think . . . if you take away last year, which is a hard thing to do because we weren’t impressive last year, I think before that we were seriously competitive.

“We got to a few Munster finals, All-Ireland final, League finals, and they’re not easy to get to because you’ve how many teams out there now that are really competitive.

“But I think last year was disappointing. Starting off this year, you try and forget about it really and try and improve ourselves. If we listen to everyone else, we’ll only stay down. We’ll have to get out of it ourselves and the only way you can do it is by training and going as hard as you can and, in every game, progress as a team.”

Manager Kieran Kingston has been introducing new faces this year, so far to good effect with three wins from three matches in the Munster Hurling League, but Horgan believes that the county can’t afford to write off the national league against a spring spent in development.

“Outcomes is number one. It’s so competitive in the league. Every game you go out to, you could say it’s 50-50 – it’s so competitive. But at the end of it every team wants to play a match and win. That’s all we want to do as well. You’re not training all year to be beaten by a couple of points and be happy about it. No one’s going to be happy if we don’t win games. It’s win as many games as we can.”

Last season about the only ray of light in a frustrating and pointless campaign was provided by a relegation play-off win against Galway but Horgan believes the team wasn’t as bad as its zero from five Division One A stats suggested.

“I think we were a bit unlucky last year if you look back at it. Against Kilkenny we were playing them off the field. They are a serious team and we know that but we played them off the field for how long? 50, 60 minutes?

“The last 10 minutes we dropped off and they came back and snuck it. It’s so competitive you actually can lose every game in the league. Teams are so good and it could happen anyone this year as well.

“The one thing we showed last year and our backs were to the wall and we had to go to Galway for relegation and they had beaten us by 13 the last time we were up there. To grind out a win there was huge for this year and having competitive league games again.”

He declined to endorse the comments of retiring All-Ireland football medallist Paddy Kelly, who was critical of Cork GAA administration in an interview with the Irish Examiner.

“I can’t speak for the footballers but I can tell you, anything we ever ask for we get: whatever benefits our team, if we ask for something or if Kieran or the management ever ask for us to do something, we’ll do it. We’ve the best facilities we can get, really.”