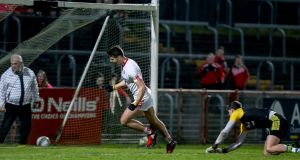 Tyrone’s Ronan McHugh celebrates after scoring a goal in the McKenna Cup match against Donegal at Healy Park in Omagh. Photograph: Andrew Paton/Inpho/Presseye

Tyrone romped to a 20-point victory and a place in the Dr McKenna Cup semi-finals at Healy Park on Wednesday.

Donegal’s under-21 side had no answer to the power and class of the Red Hands, who attacked relentlessly from start to finish.

Donegal’s familiar defensive blanket suffocated a series of attacks early on, but it wasn’t long before the home side began to pile on the scores.

In the 13th minute, Peter Harte sent Ronan McHugh in for his second goal in successive games. Harte added a couple of scores while Declan Bonner’s side could only manage a Michael Carroll point in the second quarter.

Tyrone were just getting into the mood and Darren McCurry landed a couple of superb long-range efforts to send them in with a commanding 1-12 to 0-3 advantage.

The inexperienced Donegal men had no answer to the power and movement of Tyrone’s seasoned stars, who maintained an intense level of pressure, adding five more quality points in the opening five minutes of the second half, two of them spectacular efforts from All Star Harte.

The outcome had been settled long before Cahir McCullagh punched home Tyrone’s second goal in the 68th minute from Ronan McNabb’s delivery.

It was all one way traffic at Brewster Park in Enniskillen as Fermanagh had a commanding 14-point victory over Antrim.

Fermanagh raced into a 0-5 to 0-0 lead after just 17 minutes thanks to points from Paul McCusker, Tomás Corrigan (two), Barry Mulrone and Cathal Beacom.

Antrim were to hit six wides in the first half as at the other end Fermanagh moved well in control of the game with further points coming from Patrick Reihill, Aidan Breen (two), Tomás Corrigan and two late fantastic scores from Seán Quigley gave Fermanagh a more than deserved 0-11 to 0-0 lead at the break.

The second half saw Fermanagh point early on thanks to Breen but Antrim finally got off the mark in the 45th minute with a Ryan Murray strike.

Antrim would muster a further four scores from Tomás McCann (two), Ruairi Scott and Stephen Beatty but this game was all about Fermanagh and they were to hit some wonderful scores from Mulrone, Corrigan and substitute Eddie Courtney catching the eye with a wonderful 0-3 late on.

Armagh diced with danger before finally clipping Down’s wings in this absorbing tie played in front of 4,320 enthralled fans at the Athletic Grounds.

In a rip-roaring finish, the home side pilfered a goal in added time from Aaron Findon that took them clear of their plucky opponents just two minutes after Down looked to have seized the initiative when Alan Davidson thundered in a superb 70th-minute goal.

Despite enjoying the lion’s share of possession in the first half, a combination of poor shooting and some stubborn Down defending restricted Armagh to a 0-7 to 0-4 interval lead.

When the livewire Davidson pocketed two quickfire points immediately on the resumption, Down acquired renewed confidence and from then on they exerted considerable pressure on the home side.

When Davidson stole in for his goal, Down looked as if they might pull the match out of the fire but Findon’s late strike helped to see Armagh over the line.

UUJ tore up the script at Kingspan Breffni Park to shock an admittedly experimental Cavan side in an enjoyable third-round tussle.

Cavan looked the business as they sprung into a 0-5 to 0-0 first-quarter lead but they flattered to deceive.

The hosts went into sluggish mode thereafter and points from classy sub Mark Bradley and Down man Niall Madine helped propel the students into a 0-9 to 0-8 lead just 90 seconds into the second half.

Two splendid Ruairi McGlone points kept UUJ two points in front with 20 minutes to play and while Cavan continued to nip away at their opponents’ ankles, they lacked the cunning, craft and accuracy of the students who were seen home by a wonderful brace from Paddy McBrearty.

Monaghan came good inn the second half of this fairly low-key affair at Inniskeen to book their place in the semi final.

The students got off to a lively start and had the better of the exchanges in the opening half at the end of which they led by the minimum at the break, 0-5 to 0-4.

Monaghan made a number of changes at the break and they gradually got on top with a goal by Dermot Malone in the 51st minute sending them on the way. St Mary’s finished the game with 14 players when Pearse Óg McCrickard was sent off in the final minute of normal time.

Derry scored their way into a McKenna Cup semi-final meeting after a twenty point hammering of Queen’s late last night.

Enda Lynn and Ryan Bell top scored for Damian Barton’s men who now meet Monaghan for a place in this year’s final.

Derry took a stranglehold of the first half tagging on 2-7 without reply, livewires Enda Lynn and Neil Forester both pop up for copycat palmed goals. Niall Loughlin continued his fine 2017 form, while Ryan Bell also notched over two points from play.

It was more of the same for the home side after the break with Mark Lynch and James Kielt leading Derry’s scoring blitz and ultimately sending them through.