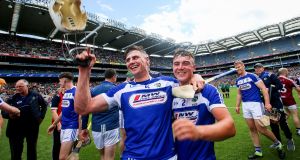 With the recent focus on St Mullins’s big win, defeating twice All-Ireland champions Cuala from Dublin, the Carlow club have attracted a lot of attention. As a result their opponents in Sunday’s Leinster club semi-final, Rathdowney-Errill, are flying a bit beneath the radar despite having visited an 18-point beating on Offaly’s St Rynagh’s in the quarter-final.

This is also despite a brilliant year to date for Laois hurling. McDonagh Cup winners and the first to defeat a MacCarthy Cup county when they eliminated Dublin in the All-Ireland preliminary quarter-final, the county now looks forward to a shot at reaching its first provincial club final in 18 years.

Tom Clear combines the roles of vice-chair of the Laois county board with chairing the hurling development committee, Coiste Iomána. He recalls the impact of the county team’s success under Eddie Brennan.

“You couldn’t buy a Laois jersey in the county coming up the Tipp quarter-final.

“It’s been going great for a couple of reasons. First of all, the success of the seniors this summer and their two trips to Croke Park – winning the McDonagh Cup and the performances against Dublin and Tipperary, which were super, but now you have Rathdowney-Errill going to a Leinster semi-final.”

High-profile former Waterford manager and RTÉ Sunday Game pundit Derek McGrath has also come on board to help with the development of the Laois minors.

“We’ve also attracted a lot of people, the likes of Derek, who’s coming in to work with our minors in an advisory and coaching role, and he has a serious pathway laid out for them to bring along the conveyor belt. Really, at the moment the hurling is very, very healthy.

“We’ve had the best part of 80 young lads in for trials for the minor panel over the last couple of months, so more and more want to come in and play because of the success and also the calibre of manager and trainer that we’re bringing in – it’s an exciting time for us.”

Most of the country is probably thinking that Laois are going straight back down next year, but we’re thinking differently

Clear is conscious that the challenge for a county like Laois is to survive contact with hurling’s glass ceiling. Carlow had a commendably competitive summer in the MacCarthy Cup even though they lost all four matches, but they had to go down again to the McDonagh Cup.

“Probably the big thing for us in the coming year is to survive in Leinster, having showed this year that we can compete with the bigger teams. That’s a big step.”

He argues that although the format won’t change immediately, there would be merit in making promotion harder but affording a longer stay in the top flight for the teams that do rise.

“The way we’re looking at it, an extra team should definitely be put into the top tier, and the team that comes up should be given a two-year window because in year one you’re only getting to grips with it. The level of hurling goes up dramatically; it’s faster and more skilful. It takes a year to get to grips with it and then the second year to stand up and be counted.

“Most of the country is probably thinking that Laois are going straight back down next year, but we’re thinking differently.

“You can’t just bring a team up and leave them there for two years, regardless of the top teams beating them. One way of doing it is like in some counties where you have to win it two years on the trot to go up to the top flight. Then you get two years to see if you can stay there. If you can’t after two years, then you deserve to come back down.”

Laois will also be in the new, expanded Division One of the league next season – with two non-hierarchical groups – which will be a help for the county when the summer comes. Clear also points out that the development systems are delivering for the county, which he believes will be improved next year.

“We’re confident with young lads coming through and there’s definitely going to be maybe four or five add-ons to our senior panel from players who have come through minor and under-20 ranks in the past year or two.”

In the meantime, there is one more target for 2019: Rathdowney-Errill, after their big win over Rynagh’s (which was only the second win by a Laois club in Leinster in 14 years ), to reach the final.

This hasn’t been done by a club in the county since Castletown took eventual All-Ireland winners Birr to a replay in the 2001 Leinster final. Ideally, they would also bridge the 23-year gap since Camross became the most recent Laois club to win the provincial title.

But take each fence as it comes.