Kilkenny v Tipperary: More they play the less they stay the same 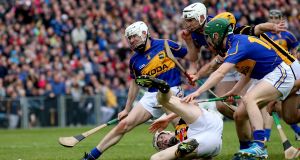 Going into their soon to be 10th final showdown in 10 years, and these days the more Kilkenny and Tipperary play each other the less things stay the same. At least in certain positions.

Injury and indeed injury prevention have played a part and so has experimentation; between them the two teams have fielded 69 different players in their league campaigns to date, and both teams have kept some big-name players in reserve too.

Of the Kilkenny team that beat Tipperary in their last league final showdown in 2014 (2-25 to 1-27, after extra-time) only five started in Sunday’s semi-final win over Wexford: goalkeeper Eoin Murphy, defenders Joey Holden, Pádraig Walsh and , Cillian Buckley and forward TJ Reid.

From the Tipperary team which started that day, only Pádraic Maher, Michael Cahill and James Barry started in their semi-final win over Limerick on Saturday: Brendan Maher, John O’Dwyer and Cathal Barrett did come off the bench.

When they played in round four of this year’s league, on February 25th, Kilkenny winning by a point, things looked a little different to what they will on Sunday too. Kilkenny had Darren Brennan in goal, while Eoin Murphy is expected to resume the position on Sunday, and Tipperary manager Michael Ryan declined to call on either Pádraic Maher or Noel McGrath, even with the game in the melting pot right until the death.

Sunday in Nowlan Park, therefore, has both teams starting sort of fresh anew. So far this league Kilkenny manager Cody has used 35 players, and while TJ Reid was again central to Sunday’s win (hitting 0-15), midfielder Richie Leahy, and forwards Martin Keoghan, John Donnelly and Bill Sheehan were among the newer lights to shine.

Conor Fogarty also returned after a long lay-off with illness and Cody still has the likes of Paul Murphy and Colin Fennelly (both on army peacekeeping duty) and the injured Richie Hogan to come back.

Ryan has used 34 players and is settled on a few positions going into Sunday’s final: Daragh Mooney is first-choice goalkeeper, after rotating him and Paul Maher and Brian Hogan during the league, “barring injury or a complete loss of form . . . but we don’t allow anybody to get comfortable here”.

Ronan Maher also looks settled now at midfield. Noel McGrath is still nursing an injured hand, but Patrick Maher is in contention to start, while others such as Joe O’Dwyer, Niall O’Meara and Séamus Callanan aren’t far off a return either.

What’s also different about both teams making Sunday’s final compared to their other meetings is that neither initially appeared destined to make it. Both lost their opening round games: Kilkenny were beaten by Cork, 1-24 to 0-24, and Tipperary were beaten by Clare, 1-21 to 0-19.

For Ryan, however, there is perhaps the more pressing matter of making some amends for last year’s league final performance, against Galway, where they surrendered by 16 points, 3-21 to 0-14.

“Certainly, that’s how we feel about it,” said Ryan, following the semi-final win over Limerick. “We keep talking about it and we are no different to any other squad. We talk about performance and performance levels and getting it up to an acceptable level. And, we certainly did not arrive at that or anything near it this time last year when we got to the league final versus Galway.

Tokyo Olympics wants Tiger Woods but will he be there? 17:29
Conor McGregor hails Donald Trump as ‘USA goat’ 16:13
Richard Johnson may have broken arm in Exeter fall 15:54
Sam Bennett grabs first win of the season at Santos Tour Down Under 12:06
Ole Gunnar Solskjær says 2-0 Liverpool defeat points to ‘strides forward’ 11:52
Here is your handy guide to sport on television this week