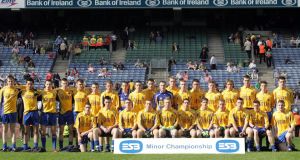 Devaney is a graduate of the county’s 2006 All-Ireland minor winning team, he is however one of just three players who remain on the current panel from that acclaimed crop.

In 2010 eight players from that minor squad featured in the Connacht final win over Sligo, with numerous others in the panel. Devaney, 22 at the time, was not one of those as he spent the summer playing and working in San Francisco.

Peter Domican, the Roscommon fullback and captain in 2010, returned from Dubai last year and has joined Devaney and Fintan Cregg who were both involved in last summer’s Connacht winning campaign.

In total, 17 players from that minor team have played senior championship football for the Rossies, and since 2010, 10 of them have made more than five championship appearances. Yet only three remain?

The likes of former captain Niall Carty and Kevin Higgins, injury has cut short their intercounty careers. For others like David Keenan, David O’Gara and Donie Shine, they haven’t fitted into Kevin McStay’s long-term plans. Donal Ward is in the US while others have simply failed to rediscover that sparkle.

The Kerry team they defeated in the final contained Johnny Buckley, David Moran and Shane Enright, all still playing for the Kingdom. While Tommy Walsh and the late Patrick Curtin have previously played for the Kerry senior team. For a county like Kerry, a good number to make the step up from one minor team.

The average age of the 15 Roscommon players who started against Cork last weekend was 24. Yet Devaney, at 30, is playing the football of his life.

“It’s funny, I think you have the potential to play well into your 30s in terms of fitness as an athlete but I think people don’t because of their family situations more than anything else,” explains the Kilbride clubman. “They might have kids, they might get married and that’s what takes the toll ultimately on playing sport at this level because it takes so much time. I’ve been lucky enough, I haven’t been injured much so hopefully there’s another few years left in me.”

I think sometimes players just roll on from year to year and they don’t really think about: ‘Why am I playing this?

Devaney was an All Star nominee last year after scoring 2-6 from the halfback line in Roscommon’s four championship matches. He feels that missing out on the 2010 success gave him hunger, while his lack of involvement under former manager John Evans added focus.

“I was away in 2010 and I missed out on that. I went back then for a couple of years and had a small bit of a falling out with John Evans so there were times where I thought I’d never win a Connacht title.

“But I got the sense when I came back in 2016 that the team had the potential to win one and we were building towards that. For me personally it was something that I was missing and it was great to win it finally.

“In 2010 I suppose I chose to leave, yeah. And again then the two years after. Has it stood to me? I’m not sure. I suppose it gives you time to reflect on what you want to achieve more than anything else and why you are playing it. I think sometimes players just roll on from year to year and they don’t really think about: ‘Why am I playing this? What do I want to achieve this year?’

“You miss out on a Connacht title and you think ‘Jesus, will I ever get one?’ And then you come back and you are probably more motivated to succeed.”

Devaney is eager to add more silverware, starting next Sunday in the Division Two league final against Cavan.

Between the two counties, they lifted three provincial minor titles, and eight Under 21 titles from 2010 to 2015. As well as playing in three Under-21 All-Ireland finals.

From the Roscommon Under-21 team who reached the 2012 All-Ireland final, 10 of the players who featured in the final against Dublin are in the current county senior panel. Last year’s goal hero against Galway, Cian Connolly would have been 11 but he is travelling to the US this summer.

That Roscommon team beat Cavan in the semi-final, with the Breffni County off the back of a second of four Ulster titles in a row.

So from the Roscommon players that beat Cork last Sunday, seven appeared in the 2014 All-Ireland Under-21 final (another defeat to Dublin). Six played in the 2012 decider. Yet for the team that finished the job, supposed to be in their peak years right now, Devaney is at least following that script.