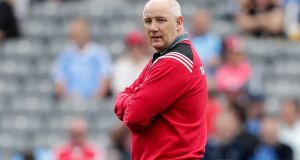 Cork manager Ronan McCarthy: ‘I think a fair reflection of the game is that we kept going at them, kept fighting.’ Photograph: Laszlo Geczo/Inpho

Somewhere among the pleasantries being exchanged between Jim Gavin and Ronan McCarthy came the truth behind the result in Croke Park on Saturday evening. Cork may have played and looked the part for the best of an hour only that can’t entirely deny the full extent of Dublin’s 13-point victory margin.

“I think we did well to limit Cork to 1-17,” said Gavin, the Dublin manager also first to praise the challenge presented to his team. “They’re a very potent side, had scored 10-48 coming into this game. We probably took our goal chances a bit better than they did, and that was the difference in the end.”

Cork’s brighter start did test their patience, though Gavin reckoned that had nothing to do with Dublin’s apparent waltz through Leinster.

“Not a factor, no, that was just the quality of this Cork side, they were very impressive and it was no surprise those points were going over the bar. Both teams really went at it, we obviously got a better return at the other end, and we’re happy with that. But Cork are playing with a lot of confidence now, are very athletic, and are probably playing a game very similar to ourselves, a skill based game.”

When turning the praise on his own team, Gavin pointed to the response to Luke Connolly’s penalty on 44 minutes: “This Dublin team has been very resilient over the years. They [Cork] got it back to two, three points in the second half and our lads responded very well to that. It was all hands on deck.”

For McCarthy, that opening hour may have represented some further progress for Cork, but there was no denying the quality of saw within Dublin either. “Look, they’re an outstanding team,” he said. “First thing they don’t panic. I think their decision making is really the key thing. They’re patient, they’ll always wait for the right man to get the shot off.

“Whereas at times we were a bit rushed, a bit hassled, in some of the decisions we made. I felt we gave as good as we got for a long time. Obviously they pulled away at the end and it looked quite emphatic. But we just have to accept it.”

Part of the Cork positive was their courage: “Overall I thought they were positive, they showed courage,” added McCarthy. “You come away from the game, 22 scores to 17, we had nine different scorers, I think, up front. There’s a lot of positives in it.

“I think a fair reflection of the game is that we kept going at them, kept fighting, didn’t sit back, but we were always under pressure. We came at it again in the second half,

“If I was to be critical of the team, I would say we’re just a small bit naïve still. But the more we play the top teams, the more we learn from it. Look, I think we’re in good shape coming into the match [against Tyrone] next week. We had huge expectations here, your best chance is to win you’re next game and that was this one. We paid a heavy price in the last few minutes of this and that’s just where we need to be clever.

“We were coming up to hold our own for 45, 50 minutes. And that’s the danger, that you come away patting yourself on the back, ‘aren’t we great for 50 minutes?’ But they always seemed more in control than we were, except for maybe the first 15 minutes, where we played some great stuff.”