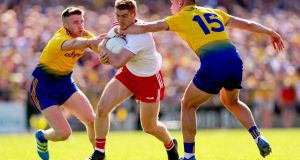 The Tyrone dressing room was one of silence - no Queen, no Turner, certainly no Wolfe Tones. It was expected the Super-8s would start with a bang and to an extent they did, but for Tyrone this was merely business, a semi-final now looking like more than a possibility. Mickey Harte said as much in that phlegmatic way of his.

“It’s an important step [towards an All-Ireland semi-final],” he said following the win. “We have to see how we go with Cork next week.

“The three of us - Cork, ourselves and Roscommon - are probably figuring out that we’re playing for second place because we’re in the group with the All-Ireland champions going for five-in-a-row.

“A win gives you a bit of a head-start in trying to get there.”

Dublin won’t fret over the Red Hand just yet though there were a number of aspects to note in their play, like the manner in which they put Roscommon to the sword, just when their hosts were beginning to blossom.

Successive points for Roscommon at the beginning of the second half had a game-turning feel to them - Diarmuid Murtagh’s effort was beautifully curled over from near the side-line while Shane Killoran’s off-balance effort subsequently tied the game. The roof of the stand just about held on. It, once again, became abundantly clear: they’re beginning to love their football in these parts.

But it only delayed the inevitable, beginning a period of Tyrone dominance that saw the Ulster men produce five without reply. Roscommon were now awakening from their dreams, and Peter Harte could easily have turned the day into a nightmare had his thundering thump not rattled the crossbar.

For the first time this summer the Connacht men were panicking.

They were being out-witted and out-played, a scenario which was highlighted by a Mattie Donnelly’s score midway when only moments earlier he appeared to have been moving rather gingerly. Peak Tyrone.

Conor Cox, so often the man Roscommon had turned to for inspiration, had gone to the well only to come back relatively empty-handed by his standards. And so Cunningham replaced the Kerry import, Andrew Glennon coming on and almost producing the goods when getting a fist to a long ball in. He had to make do with a point.

But this was nothing like the meeting of 12 months ago when Roscommon slumped to an 18-point defeat, albeit there remains a noticeable gap between the sides. Anthony Cunningham accepted his side “just have to get better.”

“They’re very clinical when they get through,” explained the Roscommon manager, “they’re a hard system to break down.

“That’s the way Tyrone play - they sit back and they have a defensive wall. It’s very, very hard to break through with bodies behind the ball.

“They’re so good at it but other teams have broken them down before.”

With the stadium tinged with that boisterous West of Ireland energy Tyrone understood the need for an electric start, bombing forward to score a brace through Brian Kennedy and Frank Burns. This was essential for them. They knew what was coming - the arena was jammed with the primrose and blue after all.

Niall Daly crept up his wing, collected the ball, then himself, and neatly slotted over. Cue what could only be described as a rapture, the echoes of hollering and ecstasy reverberating off every surface from as far out as Athleague. Cunningham’s outfit had arrived.

But Tyrone, never a team to be intimidated, weren’t found lacking for confidence, opting for their trusted 14-1 formation and leaving the strapping Cathal McShane up front to fend for himself. Roscommon, likewise, had confidence in Sean Mullooly and left him alone with the Owen Roes man.

Even on the few occasions when the hosts were carved open, the Roscommon manager remained confident in his approach, knowing only an attack-based game could see them come up trumps against last year’s All-Ireland finalists.

That renewed self-belief was never going to be enough, but Roscommon couldn’t be faulted for the lack of a clinical edge, registering just a single wide in the opening half, that being an audacious shot by Conor Cox as he attempted to replicate his absurd score from the end-line in Pearse Stadium. It was forgiven considering the boost he generated when popping over a score of the highest quality in the 16th minute. Cue more raptures. Unfortunately the Listowel man gradually drifted out of the game.

All the while, Tyrone kept them sailing over the strip of black paint, Niall Sludden and McShane leading the way; and allied with Niall Morgan whose saves prevented first-half goals for Cathal Cregg and Enda Smith Tyrone were hosed if not home.

Had those attempts hit the net Roscommon could have had something to protect during the second half.

But they were forced to chase. That’s where Tyrone like their opposition and that’s where they kept them.