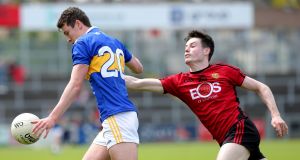 James Guinness was in fine form for Down in the win over Offaly. File photograph: Philip Magowan/Inpho

Down took a very significant step forward in Division 3 with an impressive win over Offaly in O’Connor Park in Tullamore. The win pushes Down firmly into the promotion race as well as dealing a devastating blow to the home team’s prospects.

It was a fully deserved win by Down against an Offaly side who put in their worst performance of the campaign.

Down played a very efficient and composed brand of football, both with the wind in the first half and against it in the second half.

They laid a powerful foundation in the opening 35 minutes, consistently extending a very stagnant Offaly team. With James Guinness outstanding, getting forward for three fine points, Down controlled play, despite having two players black carded, the second in injury time.

They led by 0-11 to 0-2 at half-time and even with the wind to come, Offaly had little chance. The home side did compete better in the second half as Down defended in numbers. They had it back to six points, 0-14 to 0-8, when Eoin Carroll was sent off for a second yellow card and Down closed it out very comfortably from there.