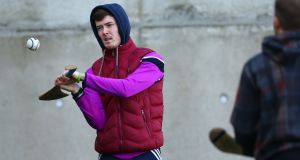 Joe O’Connor has been involved in a coffee van business during lockdown. Photograph: Tom O’Hanlon/Inpho

One man who can’t be accused of not making the most of the lockdown this year is Wexford’s Joe O’Connor.

With the schools closed – he’s a science and PE teacher in Ballymakenny College in Drogheda and lives in Dublin – he volunteered for contact tracing in UCD and set up Divil’s Brew, a coffee van, which trades on the Wexford-Rosslare road.

The business was set up with a friend and the support of the GPA’s Player Development Programme. It has exceeded expectations.

“The original plan was probably for events and day to day in different places,” says O’Connor. “We ended up setting up in a really popular spot. We never thought we’d get to a stage about opening it during the week or getting somebody else to open it but it has completely taken off.

“Rory O’Connor, my cousin (and also a county hurler), is actually working in it during the week. So we do Wednesday, Thursday, Friday, Saturday, and Sunday too.”

If the weird circumstances of this year enabled O’Connor to focus on his business idea, the pandemic wasn’t as accommodating for his hurling career on a couple of levels, as he had to get tested after a case was diagnosed in his school a fortnight ago and is very conscious of the need to be ultra-careful not to get infected but also because he was flying earlier in the year.

A wing forward converted into a full back by his club St Martin’s - where he was named Man of the Match when the club won the county title last year - and selected by Wexford manager David Fitzgerald as a corner back, his career was taking off after being a panel member for the 2019 Leinster title win.

He describes it as, “a pity this year from a personal point of view that the year had to finish up, because I was happy with how I was going and would have liked to continue that. So I suppose it is a completely new year now when we go back, so hopefully I’ll be able to pick up where I left off.”

Among the plaudits being tossed in his direction was one from Irish Times analyst and former Kilkenny All-Ireland captain, Jackie Tyrrell to enthuse after Wexford’s win over Kilkenny in the league last February that the corner back was one of the county’s improvements on last year.

“If you look at Joe O’Connor - he came on last year in the All-Ireland semi-final for Damien Reck. He looked a little lost. He didn’t really contribute and he actually ran into Liam Sheedy on the side-line (something the player recalls as ‘not my finest hour!’). He didn’t really do a whole lot, but you look at him now.

“He is exactly what Davy Fitz wants; a corner back, aggressive, attacks the ball, pops the pass and goes again. He’s brought him on.”

“After seeing him on Walter Walsh in Wexford Park in the league, I was looking forward to seeing more of him this summer but in the conventional sense of playing for Wexford in the Leinster championship

“He’s extremely quick and aggressive attacking the ball, a really good player back there - hard marking, good hurling and strong. He’s all the necessary ingredients for a modern full-back line, able to defend high and on the ground but also in terms of his delivery out from the back.

“He was in the forwards for the Martin’s a few years ago but they put him back to full back and that’s when Wexford took notice.”

He’s a member of the O’Connor hurling dynasty with his cousins Rory and Jack also playing for Wexford with whom uncles, George and John won an All-Ireland back in 1996.

He’s relaxed about the prospect of winter hurling when the intercounty championship gets up and running in October with Wexford’s first defence of their title against Galway on Saturday 31st.

“I suppose. Even from a gym point of view you’re probably going to be playing on - well, with the exception of Croke Park - heavier pitches. Weather, ball won’t be moving as quick. I think every team is so well prepared now and well drilled and their management looking after everything that every team can adapt to that and it’s not really going to be the downfall of any team.”

Connacht coping with Covid case and injuries ahead of trip to Edinburgh 07:00
Dundalk quietly confident ahead of Europa League opener 06:00
Molde unlikely to see themselves as also-rans as they face Dundalk 06:00
Measured approach sees Ireland women’s rugby squad taking shape 06:00
Philip Reid: Hard to find the sense in closing golf clubs 06:00
Crossword Get access to over 6,000 interactive crosswords