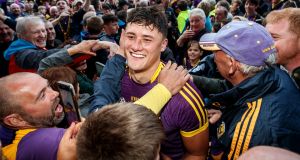 Wexford’s Lee Chin is mobbed by supporters after the victory over Kilkenny in the Leinster SHC semi-final at Wexford Park on Saturday night. Photograph: James Crombie/Inpho

Scenes from a Saturday night. The purpose-built men’s shed in the middle of the Wexford Park press box decants Davy Fitzgerald at full-time, eyes dancing like fruit machine gold coins. The South East Radio lads hug him close and offer up a chair to stand on.

The pitch is black with Wexford now and they spot him first. The roar rises like compound interest, turning the heads of the thousands in the covered stand, who rise it further. Davy lets loose a fist-pump windmill and the whole joint loses reason all over again.

Out the back, Lee Chin’s route to the Wexford bus is the only traffic jam he hasn’t been able to clear all night. In his orbit, there’s no age limit on being a kid. If you’re young, you beetle around his ankles and stand in for selfies. If you used to be young, you plant yourself next to his doorframe shoulders and dish out advice – while you stand in for selfies.

One chap in his 60s is in the middle of organising a pic when the journalists descend. And instead of running a mile at the sight of a load of tape recorders, he remains at Chin’s side for the duration, nodding along as if he has been retained as the hero’s publicist. You half-expect him to pipe up at some point and go, “Okay gentlemen, my client won’t be taking any more questions”. But no, he’s just happy to be in the middle of it.

In the middle of what, though? That’s the imponderable now for Wexford. What did they do on Saturday night? You’d be at nothing trying to tell the 18,467 who filled Wexford Park that it was anything less than seismic and certainly afterwards it felt like Kilkenny’s diminished state was a question for another time. Wexford had too long to wait for this to be fretting over the minutiae.

“Look, we’re a county of optimists,” said selector JJ Doyle afterwards. “ We’ve been disappointed on so many occasions. As a Wexford man, to see family and friends out there, to see so many people that I’ve grown up with, played with, played against, to see them with tears in their eyes, it makes all the wet nights we’ve put in over the last number of months worth it.

“Listen, we’re going to enjoy this. We’re not going to go and say, ‘Listen lads, go home to your beds tonight. We have to enjoy it. Because, what’s the point of playing this game, having an occasion like that and a performance like that if you don’t go out and enjoy it?”

Proper order. Wexford’s players deserved everything that came their way. They led 0-12 to 1-5 at half-time having played with the wind and in retrospect, it was only hard-earned fatalism that caused anyone to worry that it wouldn’t be enough. Kilkenny only scored two points from play in that first half and would only go on to score two more in the second. Wexford were superior in pretty much all facets of the game but you can’t trust that kind of thing when the old ways have been in place for so long.

But things are different now. For both teams. Twice in the game, Kilkenny landed the punches that would have jellied Wexford legs in the past. A TJ Reid penalty from their very first attack, goaled like the ghosts of drubbings past. Wexford responded with the next five points in a row and held Kilkenny scoreless for the next quarter of an hour.

With the second half underway and Wexford’s lead now pushed out to eight points courtesy of a scrambled David Redmond goal, Kilkenny reeled them in with two green flags inside a minute. A flashed effort from the excellent Colin Fennelly that squirted past Mark Fanning, another penalty from Reid. A point in it with 15 to go. Same old, same old.

Except, not. Chin caught the puckout and split the posts, a score of such unWexfordian bravado that it seemed to stop time. It was a like a school teacher blowing a whistle to make a rowdy classroom quit its messing and reminding everyone why they were there.

Chin was in superhero mode by now – over the closing 25 minutes, he had a hand in six of Wexford’s closing seven points. There won’t be a better display by a player anywhere this summer. It was a genuine privilege to be there to see him do it.

Onwards, then. Wexford bringing the hordes up to a Leinster final, Kilkenny into a qualifier draw that already contains Tipperary.

The summer is singing already.

Eoin Morgan: More than England’s captain, Dubliner is the team’s touchstone 06:00
Gerry Thornley: Ireland don’t want to box themselves into a corner 06:00
Kevin McStay: Maybe a knockout All-Ireland Championship is the long-term solution? 06:00
Successful year for Stephanie Meadow takes her to LPGA event 06:00
Owen Doyle: Ireland suffered from officiating of the breakdown 06:00
Crossword Get access to over 6,000 interactive crosswords