Nicky English: Kilkenny will be ready for all of the challenges 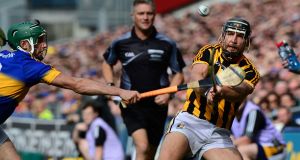 I saw Wexford under Davy Fitz from the very start. I had a very long afternoon as coach of UCD in the Walsh Cup, which was their first day out, as they pulverised us in Gorey. You could see from the attitude of the players that they were keen to impress and that they would be very ready for the league.

Galway are my pick for the All-Ireland and Wexford went to Salthill and beat them. The question is how much of that was due to their high fitness levels at that stage and the reserves needed to play that sweeper system, running support on team-mates’ shoulders.

More relevantly, Wexford went to Nowlan Park and not only won for the first time in 60 years but won very well. Kilkenny lost by five but would have been hammered were it not for Eoin Murphy’s performance in goal.

Kilkenny weren’t missing a whole pile of players on the day either but they are in a position to welcome back some key additions from injury. On the other hand, Wexford have lost a couple of players and the terrible news for Liam Óg McGovern deprives them of their significant addition. Nonetheless if Wexford can repeat that type of display they are naturally regarded as well capable of winning in their home venue.

So maybe it’s misleading to think Kilkenny are going to turn it around because that’s what they’ve always done in the Brian Cody era; whip up a grudge based on a previous defeat and that they’ll have the firepower to turn it around. They’re not the team of a number of years ago.

However they may not need to be the team of a number of years ago to win this year’s All-Ireland, let alone in Wexford Park. On the standard we’ve seen so far, if Kilkenny come out of Wexford Park with a win under their belts there’ll be no doubt they’re All-Ireland contenders.

And despite the evidence of the league I think it more likely Kilkenny will win.

If you still have Richie Hogan and TJ Reid even if Hogan hasn’t been in the form of recent vintage, and they can shore up their defence, which, unusually for them, has become a problem – and particularly if Pádraig Walsh, who had become the presumed solution at full back, is absent – we can certainly expect the gap in preparedness that was obvious in the league to have closed.

James Breen was bullying TJ Reid in a man-marking role but in some ways it was a bit early in the year for that to be entirely significant. Shaun Murphy did very well in the sweeper role but it’s unlikely Kilkenny will be as unprepared for that on Saturday as they were in April.

I also come back to my constant reservations about playing a sweeper because of the effect it has on a team’s scoring potential, as we saw on numerous occasions with Clare, Waterford and Cork last year against Tipperary. Even Wexford in the league semi-final against Tipp scored 1-19, which isn’t bad but the goal came at the very end when the game had lost its shape and was scored by a defender Liam Ryan, playing far from his usual position.

Teams are limiting their upside. Clare’s score last weekend, for instance, without a sweeper was their highest total in the Munster championship for four years.

Wexford are fit, athletic and in Lee Chin and Conor McDonald have players who are well capable of carrying the fight when outnumbered. But playing with a sweeper as they have all year, even their best bet will often be trying to win frees but if a numerically superior defence is doing its job they shouldn’t even be giving them away.

Kilkenny are also battling the march of time and the departure of so many top-class hurlers in recent years.

The All-Ireland semi-final replay against Waterford was possibly their best day last year and they had both Reid and Hogan at midfield but they’ll need to score more than they managed in the league quarter-final. They might at an early stage try to unsettle Wexford and Reid might drop deep again but they’ll need on-form forwards to win this match.

Pádraig Walsh was chosen to go backwards from wing back to the edge of the square but I had thought after the All-Ireland final last year that he might be going in the other direction, to midfield or centre forward. It’s a good example of how Kilkenny are now stretched in terms of quality and particularly in the key, central positions.

Unusually for Cody he hasn’t yet named a team, probably emphasising how dependent they are on injuries clearing up as they have a shrinking cadre of players with experience of playing those roles so the return of Michael Fennelly would be an enormous bonus.

Hogan and Reid are essentially needed in the forwards and if you bring them to the middle you denude the attack. You’re looking for Colin Fennelly and Walter Walsh to really step up in the forwards to allow one of Reid or Hogan to drop to midfield.

Ultimately though I expect Kilkenny to be ready for the physical and tactical challenge this time and, playing an orthodox formation, to get their scores more easily than Wexford will manage.