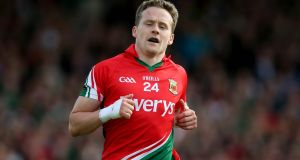 Andy Moran: the veteran Mayo forward still has the ability to pose a threat to Galway’s defence in the Connacht SFC semi-final at Salthill. Photograph: Donall Farmer/Inpho

Here’s a match with profound implications for the winners and losers and which will cast a shadow through the summer – and we’re not halfway through June.

Mayo don’t want the grand tour approach for a second year – only once has a defeated All-Ireland team got back to the following year’s final through the qualifiers – and defeat would consign Galway’s title to the status of a blip.

There are two fairly obvious dynamics at play: Galway’s undoubted improvement since unexpectedly winning Connacht last year and Mayo’s state of alert after being ambushed in this fixture last year and losing a provincial match for the first time in six years. They also have the advantage of already having played this summer.

Mayo arrive in a familiar state: agonisingly touched off in the previous year’s All-Ireland and gnawed at by grim hunger. One problem for them after a stop-start league campaign is that the familiarity extends to the team sheet. Only Fergal Boland is making a championship debut even if the team is surprisingly different (six starters) to last year’s in Castlebar.

There has been much focus on the absence of Aidan O’Shea but he appears to be troubled by a groin strain. His absence from the announced line-up – some expect him to appear anyway – resonates in this fixture because his physical forcefulness has been a factor against Galway in the past, especially two years ago.

Galway’s impressive display in last year’s Connacht final replay insists on two contexts, how poor Roscommon were and how much worse they themselves turned out to be in the All-Ireland quarter-final against Tipperary.

Kevin Walsh’s team have however absorbed the lessons and got themselves back into Division One, picking up the Division Two title along the way and ending their much-noticed 16-year Croke Park winless run along the way.

They are more practised – Galway being Galway, ‘comfortable’ would be the wrong word – executing the defensive system that has been drilled into them and adept at harnessing the genuine pace in the team on the counterattack.

The quality of their forwards is naturally compromised by the game plan and if that makes them harder to break down, it also makes the job of an already accomplished Mayo defence that bit easier.

Stephen Rochford’s team looked set for victory a year ago until the match changed and they failed to respond. That won’t happen this time.